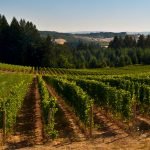 Our visit with Dan Warnshuis, founder and winemaker at Utopia Vineyard and Winery, highlighted our trip to Oregon last month. We could immediately see Dan’s passion for the vines, the fruit and winemaking. We could have listened to his stories all evening, as we tasted his outstanding Utopia wines that feature elegance and bright acidity. He opened seven bottles for us, ranging from 2013-2018. We find it very appealing that many of Dan’s older wines are considered new releases. And our time at Utopia was extra-special because we stayed at the vineyard’s beautiful, secluded log cabin, listed on airbnb. Read on for details. 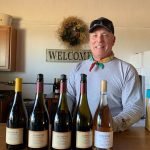 What’s in a name? Upon meeting Dan, he explained that he named the winery Utopia because “utopia is the perfect place and no place.” Dan said he tries to make perfect Pinot Noir, but since achieving true perfection is not possible for anyone, he tries instead to make the wine better in every vintage. We sampled seven of his wines, and we can definitely say it works!

Dan purchased the property in the Willamette Valley in 2000, and established the vineyard two years later. His first commercial vintage of Pinot Noir occurred in 2006, with 413 cases. Now, he also produces Pinot Noir Blanc, Pinot Gris, Chardonnay and Rosé, and production increased to 3,000 cases annually. With new acreage recently purchased, he plans to further raise production to 5,000 cases, hopefully by 2025.

The vineyard features marine sedimentary soil in 17 acres, which are organically and sustainably farmed. On our drive to the Utopia cabin, about a mile from the tasting room, Dan pointed to the new acreage, where he will be planting an additional 15 acres of vines this fall. He will add more vines to the remaining 22 new acres in the future.

Dan noted that he is “really into weather.” He said you have to be a weatherman to be a winemaker, in addition to being a good project manager who understands organic chemistry and vineyard homeopathy.

Utopia is located in the Ribbon Ridge AVA, which is a sub-AVA within Oregon’s Willamette Valley, and the smallest in the state. As well as being Utopia’s founder and winemaker, Dan is also president of the Ribbon Ridge Winegrowers Association and heads an initiative for area vineyards to be farmed without chemical herbicides. 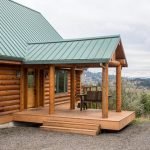 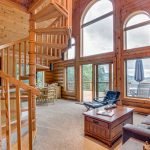 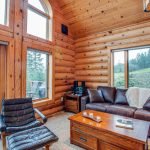 Utopia also offers a log cabin to rent on 37 acres surrounding their vineyard. We stayed there and relished the best of both worlds because the cabin is located in a private and secluded forest but has all the modern conveniences you need. The interior is magnificent and cozy at the same time. We spent warm evenings reading (and drinking Utopia wines, of course) on the large deck.

The master suite contains a king-size bed, private bathroom and a 43″ flat screen TV. Two more people could sleep in a queen-size sleeper sofa. Other features include a full kitchen, a grill on the deck, a large loft with a 65″ flat screen TV, WiFi, walking trails, and private tours and tastings with Dan.  As mentioned, the cabin is also listed on airbnb.

When you visit Utopia, you can sip wine at their indoor tasting room or at their picnic tables surrounded by their vineyard. You can play games like Boccé Ball and Corn-hole. Their location is also a venue for weddings and other private events. During our time at the tasting room, Dan poured five Pinot Noirs, Chardonnay and Pinot Noir Blanc. Their vintages ranged from 2013-2018, while they cost $45-$75. 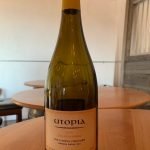 This is a full-bodied 2015 Chardonnay, which obviously stands up to aging. It opens with a nose of toast and caramel, leading into flavors of tropical fruit and citrus. This Chard was aged in a combination of stainless steel, neutral French Oak and new French oak. As a result, it shows both a kiss of oak and minerality. Last year, we tasted the 2017 Estate Chardonnay, which was also bright, fresh, clean and crisp. We didn’t prefer one vintage over another – both were delicious. 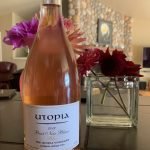 We loved 2018 Bliss, which you can see came home with us. Dan explained that he had three extra tonnes of Pinot Noir left in the harvest, so he did a lot of research and decided to try his hand at Pinot Noir Blanc. He nailed it! The color is a pretty peach, or almost champagne-like gold. Bliss opens with aromatics of citrus, peach and melon, which are mirrored on the palate. During the pandemic, we received an equally tasty sample of 2017 Bliss, the first vintage. Wine Enthusiast named both vintages an Editor’s Choice. 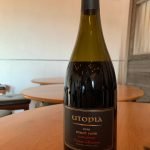 This is a gorgeous Pinot Noir. This elegant wine opens with a beautiful perfumed nose, followed by flavors of cherry, cola, cranberry, herbs and cassis, layered with spices. This also shows an underlying minerality coupled with Utopia’s trademark silky texture. This wine was excellent when we first tasted it a year ago, and now, the extra year makes it so outstanding that we brought a bit of Paradise home for our cellar. Of note, Dan said the ideal serving temperature for Pinot Noir is 68 degrees. 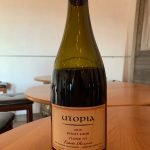 What a sophisticated wine. Dan crafts it from the best four barrels of Pinot Noir with 100% “whole cluster” fermentation. We tasted the 2017 last year and we described it the same way. But we prefer the 2015, now with six years on it. We brought it home with us, too. This stellar Pinot opens with a lovely nose of cherries and a savory, spicy earthiness. The flavors of black fruits are layered with spices and hints of cola. Well balanced, complex and structured, we plan to pair it with cedar-planked BBQ Copper River salmon. 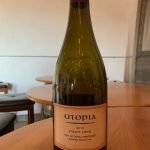 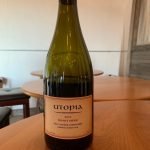 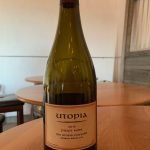 We also experienced a side-by-side vertical of Estate Pinot Noir 2013-2015. We really enjoy vertical tastings because we can taste the difference due to the vintage’s weather, in addition to aging.

At eight years of age, this beautiful 2013 Estate Pinot Noir came home with us. We already polished off the bottle! Enticing aromatics from 12 clones lead into cherry and berry flavors with spicy notes. So pretty, smooth, silky and lush, the 2013 is drinking very well right now.

Dan told us that both the 2014 and 2015 harvests were hotter than the 2013. For example, he explained, while 2014 never reached 100 degrees, there were record numbers of days over 90 degrees, with lows down to 55 at night. “Pinot likes a 40-degree temperature drop.” Meanwhile, the 2013 harvest began with an early bud break and a long warm summer, which led to a gradual and even ripening.

Last year, we tasted samples of the 2016 and 2017 vintages. Both were pleasing, clean and balanced with inviting berry aromas and flavors. Both showed excellent potential. But, not surprisingly, our preference is the earlier vintages.

In conclusion, be sure to stop at Utopia Vineyard the next time you’re near Oregon’s scenic Willamette Valley. And if your visit in the area lasts more than a day, consider staying at the beautiful, secluded log cabin on the property. What a treat!

Above all, if you aren’t familiar with Utopia wines, we highly recommend you try them. If you can’t stop by in person, then visit their online store. Enjoy!