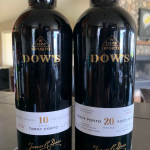 For more than two centuries, Dow’s Port from Symington Family Estates has been considered some of the finest port from the Upper Douro Valley in Portugal. Moreover, Symington recently relaunched the Dow’s Aged Tawny Port Collection to widespread acclaim. Therefore, we were pleased to receive samples of the 10- and 20-year-old Tawny Ports and, of course, held a side-by-side tasting. These ports both show fine fruit flavors with wood character. Have a sip with a little piece of dark chocolate and prepare to be wowed. Read on for more.

The Story of Dow’s Tawny Port

From one of the leading port producers in Portugal, Dow’s is managed by fourth and fifth generation members of the Symington family. The family’s goal is to balance the original fruit flavors with a proportion of wood character. This is unique in the world of port because Dow uses larger oak vats in addition to the more common 550L ‘pipes’ (barrels). As a result, in the barrel-aging process, tawny ports gradually transform through contact with air because of the permeable wood.

In other words, there is a dance between air and wood. Subsequently, the Dow’s Aged Tawnies offer a hallmark drier style and a deeper color, while losing less intensity over the years. 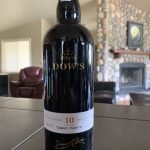 Dow’s 10-year-old Tawny Port opens with aromatics of cherries, almonds, toffee and vanilla, followed by marmalade and spice flavors. It also features an intense complexity from extended time in well-seasoned oak. Pair this with sweet desserts like apple or berry pie, or chocolate mousse. Or keep it simple, like we did, and sip it with a bite of dark chocolate. Symington recommends serving it slightly chilled. Moreover, it will last for up to one month, once open. 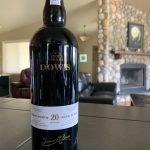 Meanwhile, Dow’s 20-year-old Tawny Port was even better than its 10-year counterpart. Elegant and balanced, you can really experience the way the fruit combines with the complex characteristics from prolonged wood-aging. On the nose, aromas of butterscotch, toffee and honeysuckle lead into flavors of concentrated red berries and a trace of minerality. In the same vein, pair it with sweet desserts such as fruitcake, crème brûlée or vanilla ice cream. Or simply nibble on nuts and dark chocolate as you savor every sip. Similar to its younger counterpart, serve it slightly chilled. Likewise, it will last for up to one month, once open.

We didn’t think we were big fans of port until we tasted these two bottles. Certainly, Dow’s 20-year-old Tawny Port is a stunner. And the 10-year port will please many palates as well. Adding a small piece of dark chocolate enhanced the experience even more. Above all, served with a slight chill as they do in Portugal, Tawny Ports are the quintessential taste of the Douro.

In conclusion, Dow’s Tawny Ports are a delicious nightcap on a summer evening. And once the chill of winter is upon us, these ports would pair perfectly with the fireplace. Thanks Calhoun & Company Communications for the samples. These are winners!