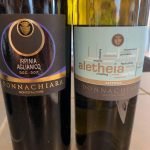 In a recent Zoom tasting, we were introduced to Donnachiara Winery, located in the province of Avelino on volcanic soils on the slopes of Montafalcione, Italy. Specifically, the winery is in the Irpinia appellation in the Campania region of southern Italy. Vineyards in Fiano di Avellino source the four most important grapes of the area: Greco, Fiano, Falanghina, and Agilanico. Notably, we tasted two wines and met CEO Ilaria Petitto in a Wine Studio education program. Read on for more information on these wines, which are available at Total Wine in the US.

Ultimately, Donnachiara’s story is based on a rich history of five generations of wine experience. Originally, the family only sold grapes from the beautiful vineyards in southern Italy. But in 2005, Ilaria’s mother Chiara inherited the vines and decided to produce their own wine. (Chiara is the niece of Donna Chiara Mazzarelli Petitto, for whom the winery is named.) Thus, a modern female-managed winery was born.

Three years later, Ilaria left her law practice to join her mother at the family business, where she created new wine labels, focused on sustainable agriculture, and dedicated herself to a passion for grape development. At that time, the winery produced 10,000 bottles annually. Today, Donnachiara makes 200,000 bottles a year, with 40% of production remaining in Italy, and the remaining 60% exported. As mentioned, Total Wine carries Donnachiara in the US. 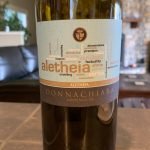 Manual selection of the best grapes are used for the production of the Greco di Tufo, which comes in 3,300 numbered bottles. The label’s word cloud makes it pop on a wine store shelf, differentiating it from other bottles nearby. We loved this wallet-friendly, versatile, smooth white wine, which features minerality, complexity and balance. The Greco offers fresh, fruity flavors of pear, apricot, pineapple and citrus. We paired it with scallops, which was perfect. But it would complement any seafood, in addition to pasta with light sauces and grilled chicken. 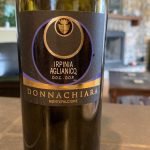 Wine critic James Suckling calls the Irpinia Aglianico “really exciting” and “full of life.” This ruby red wine is unique. We’ve never tasted anything like it before. It opens with aromas of black cherry, prunes, berries and spicy notes. Next, its flavors mirror the nose, in addition to some smokiness, figs and herbs. As well, this Aglianico landed on Wine Spectator‘s Top 100 in 2008 and 2015. We paired it with beef roast, but it will also go well with steak, pork roast, meat lasagne, dishes with truffles, and aged cheeses.

In conclusion, we are thankful to participate in the Wine Studio education program, which has introduced us to many new wines in the last year. For this final tasting of 2020, participants all received different selections. Not surprisingly, our Wine Studio colleagues also praised their samples of Donnachiara Resilienza Falaghina, Campania Aglianico, Fiano di Avellino, Taurasi and Beneventano Falanghina.

Above all, many thanks to Donnachiara for the samples. Moreover, we also appreciate the dedication and education from sommelier Tina Morey at #WineStudio, and wine educator Susannah Gold of Vigneto Communications.