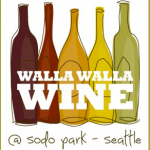 Regular readers of this blog know we are major fans of Walla Walla wine. We don’t get to visit Walla Walla nearly as often as we would like, so when Walla Walla comes to Seattle, it’s a must-go-to event.

So I dashed out to SoDo during my lunch break to visit friends and have a few (very small) tastes at “Walla Walla Wine @SoDo Park” last week.

I could only visit a few booths, and I know I missed out on lots of wineries. I wish I could have stayed longer, but work beckoned me back.

Here are the wines I tasted and would definitely purchase:

There are many, many more excellent Walla Walla wineries – and we highly recommend you visit them in Walla Walla. Some of them have tasting rooms in Woodinville too.