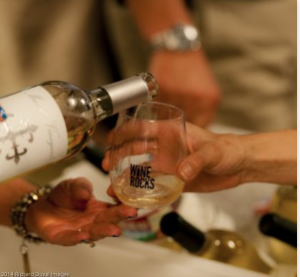 Anyone who reads this blog shares our passion and belief that wine rocks. But did you know that Wine Rocks is also an event that is in its 8th year in Seattle?

Wine Rocks returns to Seattle’s waterfront on July 9, when you can taste excellent wine, rock the night away and also help a good cause.

You can join in the fun at the 8th annual Wine Rocks Seattle at Elliott Hall & Pier (Bell Harbor – Pier 66), where more than 45 wineries, breweries and cider houses will pour their best on the city’s beautiful waterfront.

Washington winemaker and music lover Trey Busch of Sleight of Hand Cellars will serve as  emcee. Four bands will take the stage — and three of them feature Washington winemakers, including Gordy Rawson of Chatter Creek Winery, Darren Des Voigne of Des Voigne Cellars and Karris Nicklaus of Michael Florentino Cellars.

The headliner will be Seattle-based band, the Timbre Barons. But the music won’t stop between the live performances — DJ Dubreezy will also be spinning tunes on the pier.

In addition, the event has some new features this year:

Jamie Peha, of Peha Promotions and the producer of Wine Rocks Seattle, is passionate about both wine and music. She says, “Wine Rocks Seattle has kicked up the music this year with DJ tunes outside on the Pier and new musical performances including Joyfield an Indie-alternative with powerful female vocals and intriguing instrumentals and the Timbre Barons an indie guitar rock band seen at the Tractor Tavern.”

And there’s a good cause too. This year, Wine Rocks Seattle benefits the University District Food Bank, which has helped prevent hunger in northeast Seattle neighborhoods for 32 years.

Tickets to Wine Rocks are $45. Here is the full list of participating wineries, breweries and other vendors.

We hope to see you there.