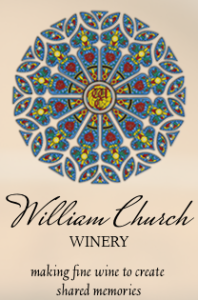 We’ve been fans of William Church Winery since March, 2008, when our wine-expert nephew, Mathew, came to visit us with a bottle of their 2005 Cabernet Sauvignon.

It was awesome, so we made a point to visit their tasting room in Woodinville’s winery warehouse district — William Church was one of the eight original warehouse wineries.

Unfortunately, this was not an easy feat at the time because they were only open on Saturdays.

Fast forward to today, and we’re extremely happy to say that William Church Winery is one of Washington state’s success stories.

We recently visited their Schoolhouse tasting room, which is open every day (and until 8 p.m. on Fridays and Saturdays), and it was thriving; packed with people cheerfully drinking some amazing juice.

This was the first time in a couple of years that we tasted their entire lineup, and wow! Winemaker (and co-owner) Rod Balsley has always produced quality wines, but these days, that quality has risen to a new level.

We love all of them because they are solid, stand-alone sippers and also phenomenal when paired well with food.

2013 Viognier: This flagship wine has always been one of Washington state’s best examples of Viognier. Somehow, this Viognier is both rich and fresh, and understandably named one of Seattle Metropolitan‘s Top Washington Wines Under $25. 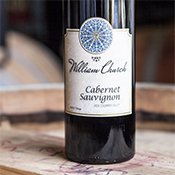 2012 Cabernet Sauvignon: We brought this wine home to pair with a good meal — perhaps a juicy steak or a savory roast over the holidays. As mentioned, we’ve loved this classic Cab Sauv since the 2005 vintage, and it just keeps getting better and better.

2012 Syrah: Another perennial favorite, this Syrah is rich and full-bodied, and tastes the way a good Syrah should: balanced, with smoke and spice, and simply delicious. We first wrote about the 2006 Syrah, which was named in the Top 100 wines in Seattle Metropolitan.

2011 2Spires: William Church was one of the first Washington wineries to produce a blend of Syrah and Cabernet Sauvignon (two wines=two spires). In the 2011 vintage, the blend is 63% Syrah and 37% Cab. Think big, bold and beautiful, and a double-gold winner at the Seattle Wine Awards.

2011 Sur La Mer: This Merlot-based wine has all five Bordeaux varietals in the blend. A newer wine in the lineup — 2007 was the first vintage of this classic blend — Sur La Mer is named after the seaport city in France where co-owner Leslie Balsley was born.

2011 Malbec: Unfortunately for us, the 2011 Malbec is sold out — not surprisingly, since Seattle Met called this double-gold award winning wine a “textbook example of Washington Malbec.” We first tasted the 2006 vintage, and before we knew it, William Church Malbec was recognized as the best in the state.

We encourage you to try some or all of these wines, and you’ll understand why they are award-winning. They also make great gifts for the wine enthusiasts in your life, for the hostess at your holiday parties or to serve guests in your home.