If you follow Write for Wine on Facebook or Twitter, you’ll know that I just spent a week in Seoul, South Korea for my job at a public relations agency. It was a first for me, and I wasn’t quite sure what to expect in terms of wine.

My friend Jaimie at L’Ecole 41 in Walla Walla told me their wines have been available in Seoul for six years, but I didn’t see them – or any Washington wines for that matter.

Then again, I didn’t get out much because I was, after all, there to work. (No, I’m not complaining at all – it was a wonderful and valuable experience, and I met some smart, fun people who work around the world at the same PR agency.) 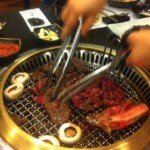 I did participate in a delicious dinner featuring Korean BBQ, where the beef was grilled on the table and cut with scissors. It was the most tender beef I have tasted in my life – ever! But not one Washington wine was on the menu. I also checked the wine lists at restaurants in two major hotels, with the same result.

So you can imagine my surprise when I came home to find out that Washington wine and South Korea were in the news! An historic free trade agreement between the U.S. and Korea kicked in while I was gone, which removes a 15% tariff on wine.

As a result, according to news reports, wine exports from Washington state are expected to increase by 40-50% in the first year. That’s because Korean cuisine, which relies heavily on beef, just happens to pair nicely with the fabulous reds that are produced in our state.

So next time I visit Seoul, I’ll be able to savor a robust, rich Cab Sauv from Washington state with my Korean BBQ. I’ll definitely lift my glass to that!