Gard Vintners was created in 2006 by the Lawrence family, who has been farming the Royal Slope, near Royal City in the Columbia Valley, for more than 45 years. We enjoyed some of Gard wines a few years ago, but hadn’t tasted any recently.

So we were delighted when we received three samples of Gard wines from Lawrence Estate Vineyards on the Frenchman Hills in the Columbia Valley AVA.

We had been told that Gard wines had developed over the years and indeed, that is absolutely right. 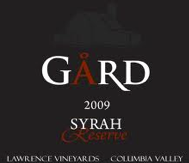 2009 Syrah Reserve packed a punch from the minute we opened the bottle.

Super dark, super ripe, super layered and super intense, this magnificent wine is smoky, earthy and powerful with a hint of black pepper.

Pair it with barbecued anything or a nice spicy bowl of spaghetti, or drink it alone, simply enjoying the lingering taste that builds sip after sip. (Released May 2012, $45)

2010 Syrah is an incredible value at $29. We recommend decanting this medium-bodied wine for an hour or two to truly experience its evolution into a rich and silky mouthfeel. Or better yet, cellar it for 2-4 years and prepare to be wowed. (Released May 2013)

2011 Don Isidro Red is a medium-bodied blend of 46% Cabernet Sauvignon, 46% Syrah and 8% Merlot that will complement a meal such as roast beef, beef stew or even a good steak. At $22, this red could be described as an easy-drinking, food-friendly value wine that could grace any table. (Released September 2013)

Props to Gard winemaker Aryn Morell – we are adding Gard Vintners to our list of favorites.