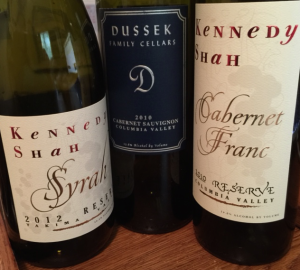 We have now opened and tasted two of the wines from The Woodhouse Wine Estates mentioned in our March 8th post, and one other wine recently released by the winery.

We were not surprised to discover that Woodhouse wines continue to drink well and provide an experience, whether paired with food, or paired with good friends.

One of many reasons that Woodhouse is unique: they release wines a bit later than most, so the wines have time to rest, integrate, and express their fullest flavor complexities, similar to many well-respected wineries in Europe.

And we have never forgotten that back in 2007, Woodhouse co-owners Bijal and Sinead Shah told us that Washington wines are so spectacular because Washington state has old-world terroir and new world fruit. This holds true today.

2010 Dussek Cabernet Sauvignon, Columbia Valley ($36)
This elegant, big and bold beauty has 8% Cabernet Franc, which adds both a subtly and an “oomph”  to the Cab Sauv. From the first sip, it was apparent why the 2010 Dussek won Best of Class Gold at  Seattle Wine and Food Experience (SFWE) Wine Awards. As with previous vintages, this rich wine has a long finish, and would pair well with a big juicy rare steak.

2012 Kennedy Shah Syrah Reserve, Yakima Valley ($42)
This is 100% Syrah goodness, an earthy, robust wine that reminded us of the best of both Washington state and Napa Syrahs we’ve tasted in the past. This Syrah was a perfect complement to Dave’s famous spaghetti and meatballs, but it could also be paired with lamb, stew or grilled meat.

2010 Kennedy Shah Cabernet Franc Reserve, Columbia Valley ($45)
At SWFE, a silver medal was given to the 2010 Kennedy Shah Cab Franc, which contains 2% Cab Sauv. But at the San Diego International Wine Competition, this luscious Cab Franc took home the gold. Complex and smooth, you can take this bottle to a special dinner party or enjoy it at home with a steak over a charcoal barbecue or even with Copper River salmon – it’s almost that time of year again.

Note: These wines were provided by the winery as samples. 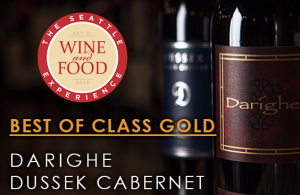 We’ve been fans of the old-world style wines at The Woodhouse Wine Estates for ten years, well before this blog was created in 2007. So we were delighted to hear that two of our favorite wines in their stellar line-up recently won recognition from the Seattle Wine and Food Experience (SFWE) Wine Awards.

We first fell in love with Darighe’s 2001 vintage, and have included it in our favorites ever since. Dussek Cab was top of our list for its 2004 and 2006 vintages, and we are pleased to see the recent 2010 winning top honors.

For a blast from the past, check out our blog post, Darighe Time, in August 2007 when we wrote about how the 2002 Darighe was going to be as highly coveted as the 2001. Fast forward almost eight years, and the rich Bordeaux blend is still bringing home the gold!

We’re also happy that Maghee Merlot won Gold as well – this is the wine that first brought us to the Woodhouse tasting room in Woodinville because we read somewhere the Maghee was a “big boy” Merlot, which appealed to us because we prefer big robust reds to any other wine.

And while we haven’t yet tasted the Silver-winning Cabernet Franc, stay tuned – we will be tasting it in the months ahead and expect to be adding it to our favorite Cab Franc list.

We strongly recommend that you visit The Woodhouse Wine Estates warehouse-chic tasting room in Woodinville — either now, during Washington Wine Month, or any time you are looking for a good Washington wine to savor.