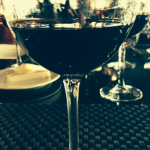 We can’t think of a better way to celebrate spring than having a five-star meal at the award-winning Six Seven Restaurant at The Edgewater, one of Seattle’s most stunning hotels.

Let us start out by saying run, don’t walk, to this gorgeous spot on the pier, where you will experience an explosion of tastes sure to please every palate.

The spring menu is as inspiring as the restaurant’s breath-taking views of Puget Sound and the Olympic Mountains, and the spectacular sunsets as well.

We were recently invited to join a group of food and wine bloggers who were lucky enough to sample delectable choices from Chef John Roberts’ new spring menu, featuring Northwest-inspired dishes crafted with the freshest and finest ingredients.

We also enjoyed the 2010 Baer Winery Ursa, a distinctive signature blend of 42% Merlot, 41% Cabernet Franc, 10% Malbec and 7% Cabernet Sauvignon, and always a crowd-pleaser.

Here is the menu of the delicious dishes we were served. 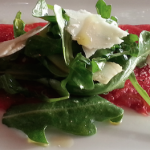 Carpaccio of Beef (perfect appetizer, signaling what to expect in the next courses) with black truffle, shaved artichokes, baby arugula, parmesan and crisp capers 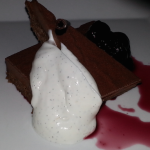 Roasted Lamb Loin (melt-in-your-mouth flavors), with rosemary roasted vegetables, gnocchi, preserved lemon and mint lamb reduction — all of which was enhanced by the Ursa blend from Baer Winery 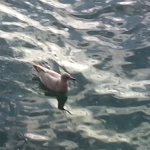 But back to the present – we highly recommend that Seattle residents and tourists alike stop by for a meal at Six Seven and a visit to the historic hotel.

We also want to thank Chef Roberts at Six Seven and Sarah Kiepe and her  Edgewater team for one of the tastiest and fun evenings we’ve had this spring.