Raise your hand if you knew that New Zealand’s Pinot Noir is right up there with its Sauvignon Blanc in terms of taste and value.

Good for you, because we didn’t!

Located at the northeast corner of New Zealand’s South Island, Marlborough is known internationally for its Sauv Blancs. But the region is also becoming popular for Pinot Noir.

We recently discovered this when we participated in a Nov. 4 Twitter tasting of two Villa Maria Pinot Noirs from Marlborough. Our main takeaway: Either one of these wines would pair very well with turkey and an assortment of sides during a Thanksgiving feast.

Villa Maria 2014 Private Bin Pinot Noir ($17)
This good-value Pinot Noir is very approachable and food-friendly, displaying the hallmarks of the region — the aromas of sweet red cherry and berries. This medium-bodied wine is ruby red, with a juicy palate of red berries, cinnamon and herbs. In addition to pairing well with turkey, this Pinot will complement red meats, smoked salmon or aged cheddar throughout the year.

Villa Maria 2013 Cellar Selection Pinot Noir ($25.00)
Also from Marlborough vineyards, this Cellar Selection has subtle smoky aromas along with red cherries on the nose, and red berry, black cherry and plum flavors on the palate. We preferred this Pinot for its silky mouthfeel, spice and earthiness, and plan to enjoy it during our family’s Thanksgiving extravaganza. Of note, it will also pair well with many traditional sides, including beet salad. Other fall and winter meals, such as lamb or wild game, will go nicely with this wine too.

Villa Maria has been a family-owned winery since 1961. In the 1990s, Villa Maria pioneered sustainable viticulture and winemaking in New Zealand, and became the country’s first wine company to declare the winery “a cork-free zone.” Villa Maria has used screw caps from the 2001 vintage onward.

There is a Washington state connection — Villa Maria wines are imported by Ste. Michelle Wine Estates.

Thank you to Villa Maria and Ste. Michelle Wine Estates for inviting us to the Twitter chat and providing samples to taste.

Enjoy these wines at your Thanksgiving table!

As the summer winds down, we’re taking a look at some good-value wines that we and/or our neighbors enjoyed in the last five months. Summer sippers make us think of white wine on the deck or the patio, paired with tasty cheeses, seafood or chicken. But let’s not forget about robust reds to accompany delicious BBQs during the warm weather!

In 1836, Wente Vineyards began with 48 acres in Livermore Valley, California. Today the winery draws from approximately 3,000 acres of sustainably farmed Estate vineyards. While we’ve written about their reds in the past, Wente is known as California’s First Family of Chardonnay. In 1912, the Wente family brought Chardonnay cuttings from France and planted them in the Livermore Valley. Their 1936 vintage was the first varietally labeled Chardonnay in the United States. During crab season, we enjoyed 2013 Small Lot Eric’s Chardonnay, which was fermented and aged in stainless steel. But our neighbors preferred 2012 Riva Ranch Chard.

For five generations, two families — the Maggios and Reynolds — have grown grapes and made wine in the historic Lodi region of California. They transformed the oldest winery in Lodi, Oak Ridge Winery, into a state-of-art facility, where Old Soul wines were crafted because “the winery has an old soul.” You can definitely taste it in the rich 2012 Lodi Cabernet Sauvignon, with a price point of $14.

Launched by Ste. Michelle Wine Estates in 2005 as a restaurant-only brand, 14 Hands introduced its “The Reserve” label of wines sourced from the Horse Heaven Hills appellation in Washington state in 2012.

Santa Cristina produces Italy’s No. 1 selling red wine, Rosso, and is also represented by Ste. Michelle Wine Estates. This Tuscan winery released its first wine in 1946 and has become a “benchmark” in Italian wines.

Motto Wines debuted this June, with a collection of distinct, dark, rich wines from California that offer a new take on that state’s wine. Motto is made by the renowned winemaking team at Ste. Michelle Wine Estates, “putting a Washington spin” on California grapes. According to the winery, “the Motto winemaking team defies ordinary and makes it their motto.”

Of note, many of these wines are so reasonably priced that you can pour them at any time of the year. Just make sure to decant first for a few hours.

Thanks to Wente, Oak Ridge Winery and Ste. Michelle Estates for these and other samples provided in the last five months. 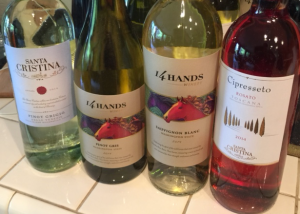 Our recent sunny May weather makes us think of summer sippers while it is still spring. So here are some recent releases of good-value whites and rosés that pair perfectly with warm evenings on the deck or patio.

14 Hands 2014 Sauvignon Blanc Washington State
Our favorite white wine is Sauvignon Blanc, particularly when it shows aromas and flavors of grapefruit. This beauty does just that, and pairs nicely with prawns or other fresh seafood dishes. It also is a refreshing crisp taste of summer to sip and savor on its own on the deck. ($10)

14 Hands 2014 Pinot Gris Washington State
After Sauv Blanc, our second favorite white wine is Pinot Gris, which also pairs best with seafood. Similarly refreshing, this Pinot Gris is rounded with flavors of pears and honeysuckle, and contains 2.5% Pinot Blanc. We recommend it to accompany seafood pasta. ($10)

Santa Cristina 2014 Pinot Grigio
This wine comes from an established growing region outside Venice, Italy. Think of orange blossoms and tropical fruit, and you’ll travel to the Tuscan sun without leaving your patio. In addition to seafood, this elegant and fragrant wine also pairs with chicken salad — or any salad, actually. ($12)

Santa Cristina 2014 Cipresseto Toscana Rosato
Cipresseto is one of the first rosés produced in Italy. Named for the Cyprus trees near the vineyards, this dry rosé blends Sangiovese and Canaiolo. Fermentation and time in stainless steel tanks generated a crisp wine with distinctive aromas of raspberry and jasmine. According to the tasting notes, its savory undertones mean it will pair well with tomato dishes or calamari.  ($14)

Other Summer Sippers from 14 Hands and Santa Cristina

Samples were provided by 14 Hands and Santa Christina, both of which are part of Ste. Michelle Wine Estates.