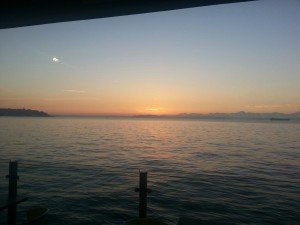 Oh what a night! We were fortunate to be invited to a bloggers’ tasting of the fall menu from Six Seven Restaurant at The Edgewater recently.

Let us start out by saying run, don’t walk, to this gorgeous spot on the pier, if you are looking for a special evening out or well, just because you can.

The food was as inspiring as the stunning views of Puget Sound and the Olympic Mountains, and the spectacular sunset as well.

Here is the menu of the scrumptious dishes we were served. 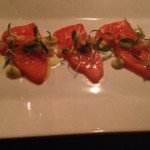 These tasty dishes are described in our live tweets on Twitter @writeforwine on Oct. 17. For mouth-watering photos and descriptions, we also suggest that you visit the blog of our new friends and well-respected Seattle-area foodies, Mary and Joy, at A Passionate Plate.

The Edgewater is a wonderful place to stay — check out these photos and you’ll see why one of my colleagues said he never wanted to leave — and also has such a rich history.

But back to the present – we highly recommend that Seattle residents and visitors to the area stop by for a meal at Six Seven and a visit to the historic hotel.

We also want to thank Chef Roberts at Six Seven and Sarah Kiepe and her  Edgewater team for one of the tastiest and fun evenings we’ve had this fall.