We recently attended the Wine Bloggers Conference, which included a “mystery dinner” that was one of our favorite events. The mystery? Nobody knew what winery they would visit for dinner until they arrived there.

We were lucky. Our van arrived at Dunham Cellars, one of our favorite Walla Walla wineries because of the excellent wine and wonderful people. It’s one of our must-stops whenever we are visiting that side of the state.

The evening was perfect. The six-course meal was delicious and paired exquisitely with Dunham Cellars wines. We sat across from the lovely Joanne Dunham, whom we hadn’t seen in several years. What a treat.
END_OF_DOCUMENT_TOKEN_TO_BE_REPLACED

We recently had the fortune to sit at a dinner table with Mike and Joanne Dunham of Dunham Cellars. We were at the 20th annual Washington Wines Festival at Waterfront Seafood Grill in Seattle, and we couldn’t have asked for more delightful company. 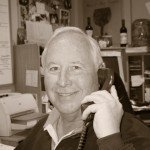 Mike and Joanne are so down-to-earth and so much fun, with so many stories to tell. We talked about wine, of course — Dunham Cellars wines and other Washington wines that we tasted at the festival. And we jokingly tried to identify some of the more obscure ingredients in the many tasty courses that were placed in front of us.

We also talked about their winery in the remodeled World War II-era airplane hangar in Walla Walla, and we shared many, many tales of all of our dogs.

The two of them had us laughing throughout the delicious dinner and prestigious auction. We had met Mike and Joanne briefly at their winery and at several wine events in the last 10 years or so. But we never had the luxury of time to talk to them at length, particularly over good food and delicious wine. 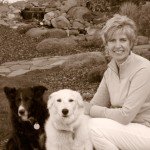 We’ve enjoyed Dunham Cellars wines for years – my first blog post about their Three Legged Red blend was in 2007 – a price-friendly wine packed with flavors and named after their wonderful dog, Port. 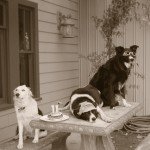 We met Port when we first stopped by the Dunham Cellars tasting room – he was as adorable as his photo on the wine bottle. When he passed away in 2008, I wrote a tribute.

Since then, we’ve sipped several vintages of Dunham Cellars Trutina, a delightful blend of Cab Sauv, Syrah, Merlot and Cab Franc, and we love 2007 Cabernet Sauvignon XII, which received a 93 rating from Wine Spectator.

We haven’t yet tasted 2007 Pursued by Bear Cabernet Sauvignon, which was a creative collaboration by their winemaker son, Eric Dunham and actor Kyle MacLachlan of Desperate Housewives. And we’re looking forward to trying the recently released 2007 Cab and Syrah from Lewis Vineyard.

We’ve always said that Washington wine is about so much more than the juice itself – it’s about the people, the stories and the spirit. Mike and Joanne Dunham, and their award-winning wines, exemplify the passion of the wine industry in this state.