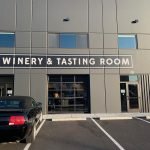 Six wineries and a distillery have found a new home in The Vault @ Maltby (9206 200th St. SE), in a new wine region less than 30 miles northeast of Seattle and only five miles from Woodinville. We recently visited two wineries — JM Cellars and Guardian Cellars. The new space impressed us, just like their wines have over the years. In fact, we’ve been fans of the wines crafted by John Bigelow, owner/winemaker of JM Cellars, and Jerry Reiner, owner/winemaker of Guardian Cellars, since we launched Write for Wine in 2007.
END_OF_DOCUMENT_TOKEN_TO_BE_REPLACED

We have been fans of Guardian Cellars since first tasting the heavenly 2004 Gun Metal, the winery’s flagship Bordeaux blend. We happily joined the crowds at the 2007 opening of the winery’s tasting room in Woodinville.

Since the beginning, owner and winemaker Jerry Riener has maintained a policy: to cellar each premium red at least one year before release, something not common in new world winemaking styles.

The result is beauty in a glass.

We visited the Guardian Cellars tasting room over the holidays and were not surprised to find out that the 2010 Gun Metal sold out shortly after its release. But we were delighted to find three more beautiful reds:

2011 Chalk Line is a scrumptious blend of Cabernet Sauvignon, Syrah and Merlot, rounded off with a splash of Malbec, Cab Franc and Petit Verdot. Jerry describes this sixth vintage as “a bona fide buffet of delicious grapes” and we couldn’t agree more.

2010 The Alibi is a stellar blend of Red Mountain fruit — 54% Cab Sauv, 31% Merlot and 15% Cab Franc from three vineyards, Obelisco, Ciel du Cheval and Klipsun. The Alibi is absolutely gorgeous in its third vintage, in our humble opinion.

In its fifth vintage, the 2010 The Rookie is 100% Red Mountain Cabernet Sauvignon, blended from grapes grown at Obelisco, Ciel du Cheval and Klipsun vineyards. The Rookie was aged for 21 months in 100% new French oak, and 17 months in the bottle, before being released a couple of months ago and is, simply, amazing.

Next time you’re in the Woodinville wine warehouse district during a weekend, be sure to stop Guardian Cellars and try these wines for yourself.