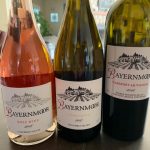 Bayernmoor Cellars is a new, small winery that opened up recently in Stanwood in western Washington. First, attorney Larry Harris and his family established a six-acre vineyard of Pinot Noir. Next, other grapes were sourced from premium Washington vineyards Destiny Ridge, Otis, Klipsun and Celio.

The family decided to focus on European-style wines that showcase the beautiful grapes grown here, and asked pioneer Washington winemaker Brian Carter to join their team.

END_OF_DOCUMENT_TOKEN_TO_BE_REPLACED 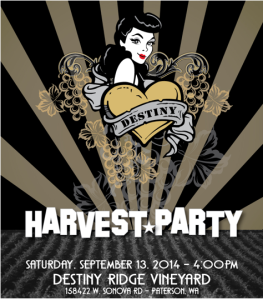 We’ve said it before and we’ll say it again: the wonderful people at Alexandria Nicole Cellars know how to party! And even better, they know how to throw a great party too.

Every year, ANC holds a Harvest Party in the Vines for wine club members at their estate Destiny Ridge Vineyard.

Every year, the party is a resounding success.

This year’s Harvest Party is on Sept. 13 and will be a special celebration of the Decade of Destiny – ten years since ANC opened the doors to their first tasting room in Prosser.

At that time, they celebrated the wines created from grapes first planted in 1998 at Destiny Ridge. Now, 16 years later, and with a second tasting room in Woodinville, ANC produces 10,000 cases of wine with more than 23 varietals planted in 267 acres of vineyard.

And that’s where the Harvest Party takes place!

The fun begins and the wine starts to flow on buses that take you to the vineyard. No worries about finding a designated driver for this party.

When you arrive, there are pours of the most recent ANC wines, while you can watch or participate in hilarious activities such as a grape stomp, wine balloon toss and skeet shooting. The vineyard and production team also compete in a barrel-rolling contest, cheered on by their fans.

Then there is an amazing dinner of steak and jumbo prawns, followed by dancing to a live big band.

So bring your dancing shoes!

We’ve been wine club members since 2007, inspired by some fabulous wine during our first visit to their Prosser tasting room, and further nudged by a Seattle Times article written by Washington state wine expert Paul Gregutt, who rated the ANC wine club as number 1.

What, you’re not a wine club member? It’s not too late to sign up and grab tickets to the Harvest Party and save a space on the buses, which leave from Tri-Cities, Yakima and Prosser. Don’t live in the area? No problem — the Richland Courtyard Marriott and the Yakima Hilton Garden Inn both have special offers for wine club members.

We hope to see you there. 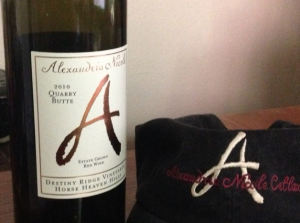 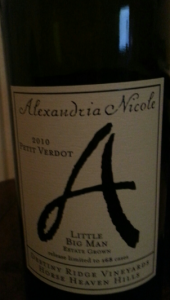 Since its first vintage in 2007, we’ve been fans of Mr. Big Petite Sirah from Alexandria Nicole Cellars. But now there’s a new ANC Big Man in Town – Little Big Man Petit Verdot. And he is another winner from winemaker extraordinaire (and friend), Jarrod Boyle.

The name, Little Big Man, represents a diminutive grape and an enormous and expressive wine.

The 2010 vintage is Jarrod’s second bottling of his lush stand-alone Petit Verdot. This grape is typically used in classic red blends — a tradition that spans centuries since the grape was grown in Medoc on the left bank of Bordeaux.

“This wine’s dark and inky black color foreshadows the seductively alluring earthy aromas of blackberries, violets, eucalyptus and cedar. The approach to the palate is generous and easy with deep black currants, more blackberries, tobacco and some plum.  The lengthy finish is complex, yet velvety smooth with hints of black cherry, espresso, and spice, backed up by solid tannins.  Enjoy this robust wine on its own or with a hearty steak.”

Our new love of Little Big Man does not take away from the long-standing appreciation of Mr. Big, which boasts huge flavors and bold structure, also from grapes sourced at Destiny Ridge.

“Deep dark and purple in color, this wine offers a complex aroma of toffee, caramel, smoked meats and earth with distinct blackberry notes and a hint of spicy French Oak. A savory and rich-mouth feel ushers in flavors of ripe fruit, brown sugar, boysenberry and cedar for this big bodied wine. A perfect balance of acid and fruit, Mr. Big finishes long with bold drying tannins. Although drinking well now, this wine is showing all the signs of being cellar worthy for years to come.”

We highly recommend both of these big wines from Alexandria Nicole Cellars, along with many others. Keep in mind that Jarrod grows 22 different varieties at Destiny Ridge Vineyard; there is no way we could choose a favorite!