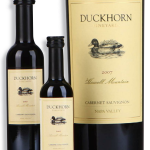 Unfortunately, we had to miss the live Don & Sons wine tasting on Twitter yesterday because it was held during the work day on the west coast. But we tasted through the wine samples after work, and wanted to share my notes.

First, these wines arrived in sample sizes from the TastingRoom.com, which I wrote about in October, and meant that we had an opportunity to taste six wines without having to open large bottles.

These wines were produced from grapes in vineyards all over California’s appellations – here is our order of preference (remember, your palate might prefer different wines than we do):

Our favorite was The Crusher, and judging from our colleagues tweets from the weekend’s event, this opinion was shared by many. If you’re never tried Petite Sirah before, The Crusher is a good place to start. Sourced from grapes in California’s Sacramento Delta, this is a rich multi-layered wine that would pair nicely with lamb or steak – and its price point is less than $20.

Project Paso would be a great wine for the holiday table or to take to a party – jammy, spicy and cheerful, this blends many grapes: Grenache, Petite Sirah, Syrah, Merlot, Zinfandel, Tempranillo, Malbec, Barbera and a touch of Touriga Nacional. Although we’re not huge Grenache fans, we really loved this $15 beauty.

The full-bodied Philosopher’s Blend has a Cabernet Sauvignon-base and small quantities of Merlot and Petite Sirah, a rich combination of fruit, chocolate and smoky notes. This is the most expensive of the six wines at $40.

The B-Side wines also captured our attention. The $30 Napa Valley Red Blend features five different grapes in a lush, rich, complex and balanced combination. The Cab Sauv ($30) is not a typical Napa Valley wine; we’d like to revisit this one again. It seemed a bit harsh at first tasting, but we suspect it would smooth out with a bit of decanting.

We had the opportunity to receive and taste the 2010 Pinot Noir at the 2012 Wine Bloggers Conference in Portland last summer. This is a medium-bodied Pinot is fruity but has depth, a good value at $21.

These samples were given to us by the winery. You can buy the full bottles on sale this month on the  Don & Sons website.