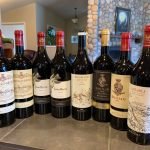 For the last month, we have participated in a weekly tasting of some excellent Ricasoli 1141 wines. The brand name underlines that the Ricasoli family has been linked to wine since 1141. This is the oldest winery in Italy and the fourth-oldest family business in the world. The result of all this experience is consistent, superb quality Chianti Classico at several price points. These wines flaunt their pedigree in the first sip. They will make excellent Valentine’s Day gifts for that special someone. Certainly, they will pair well with any celebration!

END_OF_DOCUMENT_TOKEN_TO_BE_REPLACED

This is Part 2 of a two-part post looking at some new wines that we discovered late this year. Part 1 can be found here. In this post, you’ll find a variety of holiday red wines that won’t make you dig deep in your pocket — Cabernet, Zinfandel, Chianti and Pinot Noir.

Oak Ridge Winery OZV Red Blend 2012 ($14)
If you are a fan of big, lush, jammy Zinfandels, this blend is for you. We were not expecting such a robust Zinfandel-based blend when we opened the bottle, although we should have, since it comes from Lodi’s oldest operating winery, Oak Ridge. Wow, we were hit with strong aromatics of vanilla and blackberries immediately, which then transformed to a fruit-forward blend of Zinfandel, Cabernet Sauvignon, Petite Sirah and Merlot. This wine has a lot going on, with flavors of plum, licorice and blackberries. We had it with pasta, but this rich wine would also pair well with grilled steaks, smoked meats, chicken and pizza. By the way, Oak Ridge Winery first came to our attention with its Old Soul value-wines this summer.

Representative of the Pinot characteristics in Oregon wine country, this wine is lighter, brighter and more delicate than its California counterparts, but it is definitely not a lightweight.

With notes of cranberry, cherry and apple, this Pinot will pair well with meats such as prime rib, but we think it would also be fabulous with salmon.

Sterling Vintner’s Collection 2013 Cabernet Sauvignon ($17) and 2013 Meritage ($14)
Sterling Vineyards introduced a few new releases for the holidays, including these two reds. The Cabernet Sauvignon is medium-bodied and juicy, filled with flavors of plum, cherries, blackberries and a touch of smoke and violets. If you can’t find the 2013, no worries – Sterling has already released the 2014 vintage.

The Meritage blends Merlot, Cabernet Sauvignon, Cabernet Franc, Malbec and Petit Verdot into a good wine to pair with food. Both of these wines will go well with grilled steaks, meat pastas and even roasted chicken in a rich sauce.

The 2013 Chianti Superiore is a ruby-colored blend of Sangiovese (95%) and Merlot (5%). This is a tasty, medium-bodied wine with aromas of plum and cherry that are also experienced on the palate.

We enjoyed it with pasta, but it would also go well with mushroom dishes, turkey or chicken.

Red Diamond 2012 Limited Release Mysterious Red Blend ($10)
This wine was released in time for Halloween, but it works well for this holiday season too.

A blend of 56% Syrah, 40% Merlot, 3% Viognier and 1% other red varieties, this bold wine is described as mysteriously dark, with a palate of dark red berries and a hint of spice.

It pairs well with hearty dishes such as grilled steaks, rich stews or strong cheeses, or with sweets such as chocolate peanut butter cups.

At this price, how can you go wrong?

Thank you to Oak Ridge Winery, Mark West, Sterling Vineyards, Santa Cristina and Red Diamond for samples of these wines.