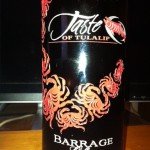 We finally decided to open our beautifully engraved bottle of 2008 Red Wine from Barrage Cellars – Kevin Correll’s featured wine of 2011 Taste of Tulalip, the annual wine and food extravaganza at Tulalip Resort.

Kevin’s 2008 Red was originally known as Stealth, a new wine label in honor of his and Rebecca’s beloved dog, Murphy — a gorgeous chocolate Lab, known for his playfulness and surreptitiousness around the wine barrels.

“Stealth,” a red blend of Cabernet Sauvignon, Syrah, Cab Franc, Merlot and Petit Verdot, sold out almost immediately. We weren’t surprised to hear this news, because we’ve never met a wine from Barrage Cellars that we didn’t like, or more often, love.

Back in 2011, with the announcement that Barrage Cellars was honored as the official winery partner of Taste of Tulalip, Kevin rebottled what little remained of Stealth and renamed it ”Murphy’s Blend.” He and Rebecca lovingly poured the nectar into engraved bottles that were featured at the event.

We bought a bottle there, and later wished we had purchased more.

But we decided to hold off on opening it; the bottle is so pretty, and filled with wine that we knew would be so, so pleasing.

But last night, we did it – we uncorked the bottle, and raised our glasses to Murphy (who is now romping around in doggy heaven with our beloved retrievers, Sam and Shadow) and also to Kevin and Rebecca, whom we are happy to call our friends.