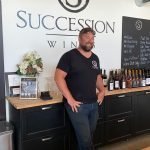 On a recent trip to Lake Chelan, we met Brock Lindsay, winemaker and co-owner with his wife Erica of Succession Wines. We enjoyed talking to Brock, loved his wines and quickly decided that Succession Wines is one to watch.

And then we discovered that the smart guys at Wine Press Northwest said the same thing … one year ago! In 2018, they also called Brock a rising star. So we are a bit late to the party but big fans now!

We were also delighted to see Brock again, meet Erica, and taste Succession Wines at the Bellingham Northwest Wine Festival on August 10, and at the Auction of Washington Wines picnic in Woodinville on Aug. 15. Please check our Instagram @writeforwine for photos from both events (and we’d love it if you would follow us too). 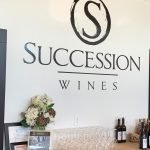 In 2014, Brock and Erica faced two major life events. Joyously, their first daughter was born. And then two weeks later, they sadly lost their home to the Carlton Complex wildfires, the largest in the history of Washington state.

But they took these events as a sign to make their dream of winemaking a reality. By the time they welcomed their second daughter, they also established Succession Wines on the north shore of beautiful Lake Chelan. “Together with our daughters, we are building a new life, a new legacy, a new succession.”

Here are some of the Succession wines we enjoyed at the auction picnic, the Bellingham wine festival and at their tasting room, with scenic views of Lake Chelan. 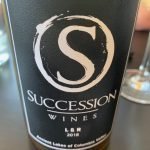 Named after their two daughters, Leila and Reese, this crisp 100% Sauvignon Blanc was barrel-aged for six months. It features bright acidity and a hint of sweetness, “much like our two daughters whom this is named after.” We tasted this Sauvignon Blanc at the winery and again at the Bellingham Wine Festival, and truly enjoyed it. Beautiful tropical aromas lead into similar flavors of pineapple, kiwi, lemon and honey. Pour it as a summer sipper or with seafood throughout the year. 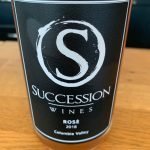 We adored this Syrah Rosé so much that we brought some home with us. Made in a classic Provence style, this rosé offers beautiful notes of grapefruit, strawberries and melon that are maintained from the nose to the palate. Like this one, our favorite summer wines feature crisp citrus and refreshing acidity. We sip it on our deck lakeside on warm evenings, and watch its pretty color match the beautiful Washington sunset. 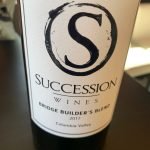 This well-balanced Cab-based blend is another Succession wine that we took home from their tasting room because we loved it so much. Cabernet Sauvignon (44%) and Cabernet Franc (20%) mingle with Merlot (33%) and Malbec (13%) and form a smooth, rich and just gorgeous Bordeaux blend. Wow. Bring on the barbecue and let’s party! 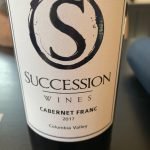 We savor Cab Franc as a standalone wine, not just in blends. So we are happy to add the Succession vintage to our list of favorites. Layered, balanced, complex and simply lovely, this wine features aromas and flavors of lush black cherries, plums, sweet herbs and blackberries, along with hints of vanilla, black pepper and pencil shavings. This beauty is young, so be sure to decant it for a few hours to open up its flavors, or cellar it for awhile. 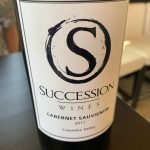 This is another young wine with amazing potential. Once this Cabernet Sauvignon opens up, we expect to be wowed. (The 2015 vintage won best of class and double gold at the 2017 Wenatchee Wine Competition.) Full-bodied with lots of depth, this is a beautifully structured, silky, smooth wine with a lovely mouthfeel. Flavors of blueberry, leather and earthiness spice it up. You can enjoy it at summer BBQs, or save it for winter to pair with prime rib, roast, or grilled meats. 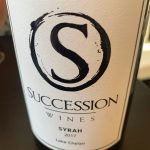 Talk about mouthfeel! This Syrah fills your mouth from beginning to end with flavors of raspberry jam, dark fruit, pepper, cured meat, wet stone and a hint of licorice and tobacco. The 2016 vintage won double gold at the Tri-Cities Wine Festival. We first tasted it at the Succession tasting room, and then again when Brock poured it at the Auction of Washington WInes picnic. Yes please! This Syrah pairs beautifully with Dave’s spaghetti, pizza, blue-cheese burgers or soft cheeses. 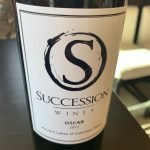 This stellar wine is named after their family’s loving Bernese Mountain Dog, who sadly passed away in December 2017. Oscar 2017 is a smooth Merlot that shows the love in every sip. Before the 2017 vintage, the wine was labelled as Merlot. But Brock discovered that some people were reluctant to try it because of the grape’s continued controversial reputation. With a smile, Brock told us that people were more open-minded to taste it when it became known as simply Oscar. And then the wine became one of their best-sellers.

We highly recommend stopping by the Succession Wines tasting room, with its spectacular views on Lake Chelan. Try all their wines, and we suspect you too will become a big fan.