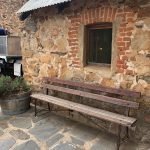 The third Cellar Door we visited in the Barossa, Rockford, provides a unique Australian experience. The winery was built in the same style as the original 1850’s stone cottage and barn. Their trademark is the use of traditional wine-making equipment, principles and practices in the vineyard. Everything is hand-pruned and hand-picked. In the words of famed Australian wine critic James Halliday, “Rockford can only be described as an icon, no matter how overused that word may be.” (Hear, hear.)

In 1971, founder and owner Robert O’Callaghan bought five acres of land to start Rockford, with his first vintage in 1984. This is recent compared to some of the Barossa’s historic wineries and 150-year-old vineyards. Since then, O’Callaghan turned Rockford into one of the region’s most traditional wineries, which consistently produces high-quality wines. 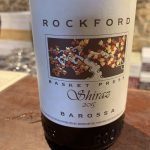 Prior to our trip, we read in a Halliday review that Rockford Basket Press Shiraz is as scarce as Henschke Hill of Grace. So we were delighted to find out that this beautiful wine was just released before our arrival, and therefore available. Rockford’s Basket Press Shiraz is its flagship wine, cornerstone to the traditional winemaking style that is the winery’s trademark.

The wine was made by hand, using equipment from the turn of the last century, then aged in American and French oak for two years prior to release. With complexity, earthiness and a depth of rich, ripe fruit flavor, this amazing Shiraz was sourced from vineyards in different sub-regions of the Barossa. According to the bottle label, this Shiraz is “a big, old-fashioned red that will put a smile on the face of all those who drink it – but the biggest smiles will belong to those who are patient enough to put it away in the cellar for 10 years.” 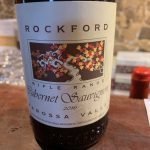 We were surprised to learn that Cabernet Sauvignon was first planted in the Barossa in the late 1800s. Rockford’s Cab Sauv is one of the best we’ve tasted in Australia. Rich and full bodied, this wine is made from grapes sourced mainly from vineyards along Rifle Range Road. Heavy clay soils produce earthy notes along with dark fruits, barrel spice and a hint of vanilla. According to Rockford, this also is “the perfect wine to hide in your cellar, for as long as you are able.” 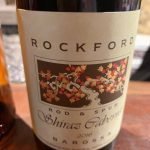 The blend of Shiraz and Cabernet is a specialty of Australia, although other winemaking regions also produce it. We loved this beauty for its seamless integration of the two varieties, along with its elegance and richness. Aromas and flavors are mirrored with notes of plums, dark cherry, blackberry, spices, pepper, dark chocolate and cassis. This blend is well-balanced but young, so be sure to decant it, or cellar for the next 8-10 years. 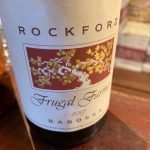 Frugal Farmer is light-to-medium bodied, fresh and vibrant, yet earthy and savory, with flavors of dark fruit, black and white pepper, spice and herbs. This red wine is known as a GMA blend — Grenache and Mataro (Mourvedre) co-fermented with the skins of Alicante Buchet, which were not used in their Alicante Bouchet Rosé. The addition of the Alicante skins to the ferment adds the spice and a vibrant color.

Rockford wines are only available at the Cellar Door or by mail order. We loved these wines, so we highly recommend you visit the winery in the Barossa, if you are in Australia. We are so glad we did.