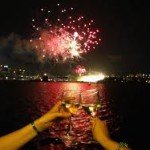 When you’re a wine enthusiast, you tend to have a lot of bottles of wine in your cellar. Many of them hold promises of a spectacular wine experience, and what better way to ring in a new year?

The problem, however, is finding just one bottle that best represents such a special occasion.

We talked about pulling two bottles of reds from our cellar, but there were simply too many excellent ones to choose. (Such a problem to have, eh?)

So first, we reduced the options by restricting the list to Cabernet Sauvignon. Then we limited it to the great juice produced in Washington state and some wine from Napa Valley, where Cab is King.

Believe it or not, the list was still big, so we decided to hold our unique version of a blind tasting. Sort of.

On one side of the counter, we placed several bottles of Washington state Cabernet Sauvignon; on the other, a few bottles of Napa Cab. We put each one in a wine bag, so we couldn’t see the labels, and chose one from each side.

Let’s keep this in perspective though – all the wine was highly rated, so we knew in advance we couldn’t lose!

And the winners were (drum roll please):

We’ve long been fans of Fidelitas wines produced by Charlie Hoppes and his team at Red Mountain, and we’ve been drinking wine from Grgich Hills for more years than I can remember (although not as far back as 1976, when Mike Grgich brought Napa Chardonnay to world acclaim at the famed Paris Tasting).

So we rang in 2013 with some marvelous Cabs, and wish you a healthy, happy and prosperous new year.