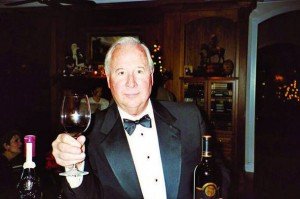 In 1995, Mike and his son Eric created one of the most respected wineries in Walla Walla and in the state. Mike was the general manager, a businessman and loved by many people.

He will be remembered fondly and deeply by so many, including Trey Busch, one of the first employees at Dunham Cellars, and now owner and winemaker of Sleight of Hand Cellars in Walla Walla.

Trey posted this photo of Mike on Facebook, and kindly agreed to let me repost it here. Thank you, Trey.

We were fortunate to share a table with Mike and his wife, Joanne a couple of years ago at the Washington Wines Festival at Waterfront Seafood Grill in Seattle. As I wrote then:

We also talked about their winery in the remodeled World War II-era airplane hangar in Walla Walla, and we shared many, many tales of all of our dogs. The two of them had us laughing throughout the delicious dinner and prestigious auction. We had met Mike and Joanne briefly at their winery and at several wine events in the last 10 years or so. But we never had the luxury of time to talk to them at length, particularly over good food and delicious wine …

… We’ve always said that Washington wine is about so much more than the juice itself – it’s about the people, the stories and the spirit. Mike and Joanne Dunham, and their award-winning wines, exemplify the passion of the wine industry in this state.

We experienced great sadness to learn of Mike’s passing last weekend. He will be remembered for his graciousness, his humor, his smarts and his love for his family. He will be missed by so many who were fortunate enough to know him.

Mike is survived by his loving wife, Joanne, his son, Eric, and daughters Katy Dunham in Colorado and Michelle Sikma in Alaska.

R.I.P. Mike. We lift a glass of Dunham Cellars wine in your honor.