We recently hosted our monthly “Booze Group” and held a tasting of licorice alcohol, paired with Greek food. The most commonly known licorice-tasting drinks are Ouzo, Sambuca, Pastis, Pernod and Absinthe. Others include Arak, Anisette/Anis, Raki, Aguardiente and Xtabentun. Read on for details of the anise-flavored booze we tasted, and the menu. 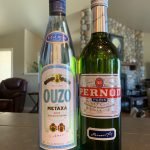 Almost every region offers an anise-flavored alcoholic beverage. The licorice flavor usually comes from anise or star anise. Anise is a plant with long stems and white flowers, and star anise is a fruit from a tree related to the magnolia family. We contributed Pernod Paris (France), and Ouzo Metaxa (Greece) to the tasting. The other two couples brought Absente Absinthe Refined (France) and Yeni Raki (Turkey). First, we sipped them, next we added ice to them, and finally we crafted cocktails. Each featured unique flavors, and subsequently the group liked all of them.

Absente crafts Absinthe Refined in southeastern France. This is 110 proof, using high-quality artisanal distillation methods and ingredients. The recipe includes the botanical wormwood, the key ingredient of an authentic absinthe recipe. Consumers have always known that wormwood contains digestive and antiseptic properties. However, In the mid-19th century, people started to use it for its supposed hallucinogenic effects, caused by the thujone (naturally present in the herb). As a result, it was banned in 1912. Almost a century later, in 1999, this recipe became the first absinthe containing thujone available in the U.S. since the ban. On the other hand, Absente limits the thujone level to 10mg per liter.

Mey Yeni Raki is the world’s most produced and popular raki. Yeni Raki features an intense anise scent and characteristic taste, containing 20 different grapes from Turkey within its ingredients. Moreover, their anise comes only from the Western Anatolian Regions. In production since 1944, it is also one of the oldest raki brands in Turkey. Mey double distills Yeni Raki in traditional copper flasks. They do not add other extracts or herbs, which isn’t always the case in other aniseed spirits.

The oldest anise liqueur in France, Pernod Ricard makes this brand from distillates of star anise, fennel and 14 other botanicals such as coriander and mint. The original version also included wormwood and was produced as absinthe since1805. Today’s Pernod began in 1938, although the company released a reformulated absinthe-based on the original recipe in 2005. Now established in over 110 countries, Pernod Paris is renowned for its subtle flavors. It has a low licorice content, which consequently sets it apart from pastis.

I initially tasted this Ouzo by Metaxa when I was in Greece many years ago. Not surprisingly, Ouzo is a classic Greek alcoholic beverage. In the early 1900s, the Metaxa distillery in Piraeus created many alcoholic drinks, including the popular Ouzo. These days, it’s the number-one selling Ouzo in the US, with a clean, crisp anise taste. Metaxa makes it from a precise combination of Tsipoura (pressed grapes) and select herbs and berries including aniseed, licorice, mint, wintergreen, fennel and hazelnut. Master distillers at the House of Metaxa handed down Its unique recipe for generations.

Menu to Pair with Licorice Alcohol

Here is the menu served at our Booze Group event. First, we sipped our drinks with appetizers, next came dinner and dessert.

In conclusion, we love licorice-flavored beverages. And there are so many to choose from. They pair well with certain food flavors, but also are tasty enough to enjoy as an aperitif or digestif. We will not have any difficulties finishing our contributions to this group event.