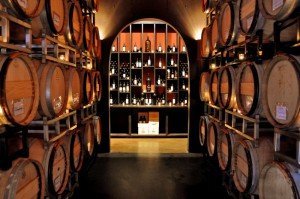 If you’ve never been to JM Cellars in Woodinville, you are missing out on many wonderful Washington wines. Located on a hillside called Bramble Bump, JM Cellars offers first-class wines with a view.

Luck was with us a couple of weeks ago, when we stumbled upon an unexpected release party at JM Cellars. Winemaker/co-owner John Bigelow was pouring with a smile and our friend Paige Leighton welcomed us with hugs. And the wines – oh my.

We’ve been fans of JM Cellars signature blend Tre Fanciulli for years, so it was no surprise that we went home with the latest 2009 release. Tre Fanciulli is Italian for “three treasured lads” and named for John and Peggy Bigelow’s sons in 1999. With this new release, and the eleventh vintage, the name has been shortened to simply Tre. Love it!

The JM Cellars 2009 Boushey Vineyard Syrah is also outstanding. John told us the single-vineyard grapes came from old vines near the house of viticulturalist Dick Boushey, one of Washington’s finest grapegrowers. After Matt Sauer’s Red Willow Vineyard, Boushey was the next to plant Syrah grapes in Washington state. If you like big, peppery, savory Syrah, you simply must try this one.

Another one of John’s wines that we’re particularly fond of is the 2009 Margaret’s Vineyard Estate Red. We first tried this stellar wine as a pre-release at the Taste of Tulalip last November, and couldn’t wait to taste it a few months later at its official release party.

It’s the inaugural vintage of a Bordeaux blend from vines that were planted in 2007 on the southern border of the Walla Walla appellation at the then-newly named Margaret’s Vineyard. The wine blends 37% Cabernet Sauvignon, 17% Merlot, 17% Cab Franc, 17% Malbec, 6% Petit Verdot and 6% Carmenere.

JM Cellars is known for elegant blended reds. And regular readers know my preference for Cab-based Bordeaux blends, so you know we took this beauty home with us!