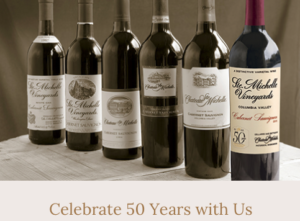 This year marks an historical milestone for Chateau Ste. Michelle and the Washington wine industry — it’s the 50th anniversary of the oldest winery in the state, so let the celebrations begin!

According to the winery, “Chateau Ste. Michelle has become the number two premium domestic wine brand sold in the U.S. (Nielsen-Dollars), with wines available in all 50 states and more than 100 countries.”

“It is truly remarkable what Chateau Ste. Michelle and the Washington wine industry have accomplished in a relatively short period of time through a pioneering spirit, collaboration and hard work,” said Ted Baseler, President and CEO of Ste. Michelle Wine Estates. “With significant new vineyard plantings, industry investment in research and the education of future grape growers and winemakers, we can honestly say the best is yet to come.”

Here are the “50 cheers to 50 years” events and projects planned by the winery this year; you can also view the winery’s 50th Anniversary video or view a Celebration page on its website.

Special Bottling Cabernet Sauvignon, Columbia Valley
In April, to kick off the anniversary celebrations, the winery will release a commemorative label 50th Anniversary special bottling of its Columbia Valley Cabernet Sauvignon (750ml, SRP: $15), which will pay tribute to the first 1967 vintage. In addition, a one-time magnum (1.5L) bottling will be released for retail and restaurants and serve as a great collector’s item.

Golden Cork Sweepstakes
From April 1 to Sept. 30, inside every 50th Anniversary special bottling of Columbia Valley Cabernet Sauvignon is a chance to win one of 50 prizes. Four Grand Prize winners will be selected to win a trip for two to visit Chateau Ste. Michelle in Woodinville.

IMPETUS
In September, the winery will release 4,800 numbered bottles of IMPETUS (750ml, SRP $125) by Chateau Ste. Michelle, the brand’s wine showcasing the three varieties that are stellar in the Washington region but are not traditionally blended together (Cabernet Sauvignon, Syrah and Malbec).

Chateau Ste. Michelle History Book
The winery will release a highly illustrated coffee-table style book to tell the rich story of the Washington wine industry and Ste. Michelle’s role in bringing it to the forefront, commemorating the winery’s five decades of tradition and innovation.

Newly Expanded Visitor Center
Targeted for August 2017, Chateau Ste. Michelle will unveil an expansion of the winery’s visitor center — the largest in the company’s history. Doubling the size to 22,731 sq. ft., the new visitor center will feature a modern 70-seat theater, an interactive blending room (where guests create their own bottle of wine from the winery’s iconic estate vineyards), private tasting salons, a Club Room, an Enoteca to sell wines from sister wineries in the Ste. Michelle Wine Estates portfolio, a new outdoor terrace and more. A grand opening celebration will take place during Labor Day weekend, Sept. 2-3.