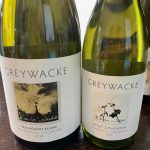 We have been fans of Greywacke Sauvignon Blanc for years, because this crisp, refreshing wine is readily available in the U.S. More recently, we’ve also become fans of Greywacke Wild Sauvignon, which appeals to our funky palates.

So when we travelled to New Zealand a couple of months ago, a visit to Greywacke was at the top of our list. What a treat.

We spent a few hours at the Greywacke headquarters in Marlborough, learned the winery’s captivating story, and tasted many wines. This is part one of a two-part series, and focuses on the story of Greywacke. Part two features the five wines we tasted in Greywacke’s portfolio.

Of note, Greywacke’s outstanding wines are available in the U.S. and elsewhere. 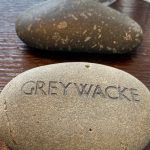 The name Greywacke was registered and adopted by talented winemaker and owner Kevin Judd, and his wife and co-owner Kimberley, for their first Marlborough vineyard located in Rapaura. The name recognizes the high prevalence of rounded greywacke river stones in the soils of the vineyard. “New Zealand does not have a designated national rock, but if one was ever chosen it would have to be greywacke.”

Kevin is one of Marlborough’s pioneer winemakers. He was born in England and grew up in Australia, where he studied winemaking and first crafted wine. Subsequently, he moved to New Zealand in1983, joining Selaks Wines. Next, he became the founding winemaker at Cloudy Bay – known in the U.S. for its crispy Sauvignon Blancs. He stayed at Cloudy Bay for 25 years, and then opened his own winery. His first vintage of Greywacke Sauvignon Blanc was crafted in 2009.

In addition to winemaking, Kevin’s creativity also extends to photography. Indeed, he is considered one of New Zealand’s finest wine photographers. His second book, The Landscape of New Zealand Wines, met critical acclaim. It features vineyard photos from all of the country’s wine regions. His photos are also highlighted on wine labels and beautiful cards. 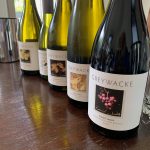 The Greywacke grapes are sourced from mature vineyards within the central Wairau Plains and the Southern Valleys of New Zealand. The maritime climate keeps the temperature mild.

Kevin makes the wine at Dog Point Winery, owned by long-standing friends, Ivan Sutherland and James Healy, with whom he worked at Cloudy Bay. Sutherland family vineyards produce many grapes for Greywacke wines.

We visited Greywacke at the beginning of harvest, so Kevin was extremely busy and we unfortunately didn’t have the opportunity to meet him. But Kimberley entertained us with stories of Greywacke as she poured five wines for us.

We loved them all, and you can review details in our next post, Greywacke New Zealand – Part Two.

We highly recommend you plan a visit to Greywacke if you are in this incredible wine region. If not, as mentioned, Greywacke wines are available in the U.S., Canada and other countries.