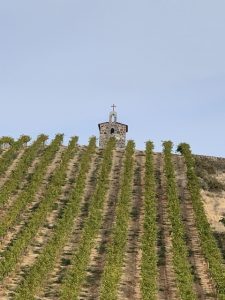 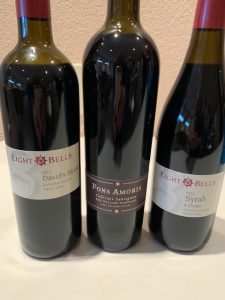 During our visit earlier this month, Mike, his wife Karen, and son Jon took us on a tour of parts of the vineyard, including the blocks of clones.

Later we tasted three wines made of these clones by Eight Bells Winery and Lady Hill Winery.

The wines were Eight Bells 2013 David’s Block, named after David Lake; Eight Bells 2012 Syrah; and Lady Hill 2012 Fons Amoris Cabernet Sauvignon. We weren’t very familiar with either wineries, so this was an educational experience on several levels.

Eight Bells Winery is an urban winery located in Seattle

Eight Bells is a small urban winery, producing two thousand cases a year in the Roosevelt/Ravenna neighborhood of North Seattle. The winery opened in 2009, and is jointly owned and operated by Tim Bates, Andy Shepherd, Frank Michiels, and Neal and Denise Ratti. Neal and Denise joined the wine-making team in 2018; as home winemakers, they have been working with Red Willow fruit for over a decade. 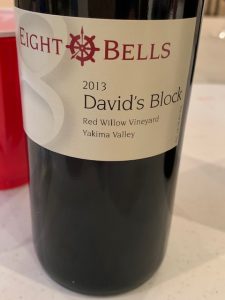 Eight Bell’s 2013 David’s Block is a medium-bodied, smooth and well-integrated red wine that blends 54% Cabernet Sauvignon, 18% Malbec, 9% Cabernet Franc, 8% Carménère, 7% Merlot, and 4% Petit Verdot. The Cabernet is sourced from a dozen Red Willow clones, which brings layers of complexity to this wine, which we loved (and later paired with steak, which was delicious).

We also tasted Eight Bell’s 2012 Syrah, made from eight clones and blended with 4% Viognier and 1% Grenache. What a pretty wine with ripe fruit flavors. The 2012 is sold out, but the 2013, 2014 and 2015 vintages, along with David’s Block, are available on Eight Bells’ website.

Jerry and Elaine Owen co-founded Owen Roe winery in 1999, and then in 2012 launched Lady Hill on 1,500 acres that Jerry’s family has farmed since the 1850’s. Located just outside Newberg, the winery produces 10,000 cases annually. 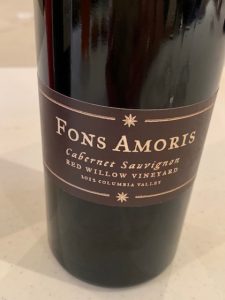 Mike told us this 100% Cab Sauv comes from several clones, resulting in a vibrant, layered, complex and appealing wine. Unfortunately, this vintage is sold out, but you can find other Red Willow wines on Lady Hill’s website.

Thanks to Mike Sauer, our experience at Red Willow VIneyards was both educational and enjoyable. We appreciate the hospitality shown by Mike, Karen, Jon and his wife Kelly, and plan on experiencing many more wines sourced from Red Willow Vineyard in the future.