We had a limited amount of time to visit wineries in Woodinville this past weekend before heading to a Jackson Browne concert, part of Chateau Ste. Michelle Summer Concert Series.

We knew we wanted some classic Washington state Cabernet Sauvignon, and we knew we only had a couple of hours to taste. So we found the most recent vintages of three of our favorite Cabs and one Cab-based blend. And we tasted one new Cab that will be released in the near future. 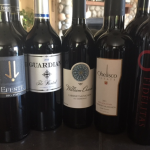 All five wines are big, bold and beautiful – it will be a tough choice to decide which one to pair with a big juicy BBQ steak.

And by the way, the Jackson Browne concert was fantastic, and paired well with 2012 Chateau Ste. Michelle Cabernet Sauvignon.