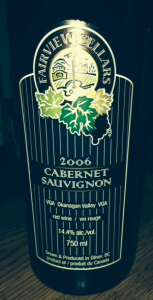 Some of the best Cabernet Sauvignon and Bordeaux blends in British Columbia can be found at Fairview Cellars, a small unassuming winery in Oliver, which we recommend as a stop in any tour of B.C. wine country.

While many wineries in B.C. (and Washington state) have become gorgeous destination resorts, Fairview Cellars has a rustic tasting room in a tiny log cabin about five minutes into the hills off the north end of the Benches of the Golden Mile. Sandra Oldfield of Tinhorn Creek suggested we stop by during our September visit, and we now know why.

We found the Cabs and Bordeaux blends the best. But we also enjoyed Fairview Cellars 2013 Sauvignon Blanc on the hot end-of-summer day we visited; it was crisp, well-balanced and delightful.

And the stories from winemaker/owner Bill Eggert and his brother, Chuck, were an entertaining accompaniment to our tastings.

Fairview Cellars 2006 Cabernet Sauvignon
This is an amazing wine that is drinking beautifully right now and still has about 10 more years left in it. This classic cab is a special-occasion wine that will pair marvelously with savory and/or smoky meats. We loved it.

Iconoclast Premier Series
Bill only makes Iconoclast when he thinks the Cabernet Sauvignon grapes are near perfect – the most recent vintage is 2009, and the next release is 2012. This is another special wine, rich, silky and with great structure and balance. This is one big cab, which would pair so very well with a big, juicy steak.

2011 & 2012 Two Hoots
The flagship Cab-Merlot-Cab Franc blend is “produced for daily consumption,” according to Bill. He also says that while there are many reasons for the name, the main one is “to honour the return every year of the Great-Horned Owls to nest on the Fairview property.”  This is a medium-weight blend with a flavorful punch. The 2011 vintage has floral notes and is one of the winery’s best sellers. The 2012 has the same blend, but is bigger and bolder, and we really enjoyed it.

2011 The Bear
Another favorite, The Bear is Cab-based (50-75%, depending on the vintage) with Merlot, Cab Franc, Malbec and Petit Verdot to round it off. This is a classic Bordeaux blend, with grapes from the best barrels chosen, and stored from 14-20 months. Thinking of pairing? Think prime rib.

For our friends in B.C., you can find Fairview Cellars wines in a number of places, although we still recommend a visit to BC wine country.

As a young child, my family visited the Okanagan every summer, swimming in the numerous lakes and picking cherries. I said this in Part 1 of this series, and I’ll say it again now: Beautiful British Columbia, you’ve come a long way, baby!