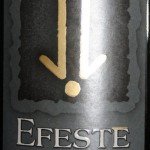 In the last couple of months, we found ourselves drawn, like magnets, to several EFESTE wines – the rich Big Papa Old Block Cabernet Sauvignon, the smooth Final Final red blend and the robust Eleni Syrah, in addition to long-time favorites, Ceidleigh and Jolie Bouche Syrah.

We’re in good company for recognizing EFESTE’s fine wines, created with an individual twist and an amazing talent by winemaker Brennon Leighton.

“Leighton’s Lola is the sort of wine that makes you rethink domestic chardonnay entirely – it is light years beyond the dull, apple-flavored juice, sometimes slathered in new oak, that generally typifies the category. … When first opened, the 2009 Lola had me immediately gushing: “This is as good as the best from California – textural, creamy, a delicious mix of lemon custard, meringue, caramel, papaya and toasted coconut. At one third the price of comparable bottles, this young wine just seduces from the instant it hits the tongue.”

Gregutt also named EFESTE’s 2007 Big Papa Cab as No. 26 on the list of Top 100 Washington wines in The Seattle Times. Meanwhile, I called Big Papa a “Must-Have Cabernet Sauvignon” in my article, Must-Have Bottles of Wine in Seattlelite Magazine. 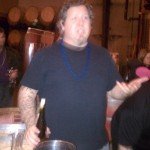 In 2009, Seattle Magazine hailed Brennon as Winemaker to Watch and Efeste Wines as the Best New Winery. These days, Brennon is indeed considered a star  in the Washington wine world.

But he remains exactly the same as when we first met him in 2008 – open, blunt, sharp and passionate, a talented man whom my mother would have said “pulls no punches,” and an artist who also likes to experiment.

Actually, everyone from EFESTE is passionate, smart and fun – Daniel and Helen Ferrelli, Kevin and Angie Taylor, and Patrick Smith. I’m happy to say that Dave and I have become friends with the wonderful group at EFESTE, and I’ve helped them with Twitter for almost a year.

But it began with the wine. We first tasted the wine at St. Nick’s in 2008 and instantly became members of EFESTE’s Inner Circle wine club. The friendships developed over time.

If you’re in the Woodinville area, stop by EFESTE’s tasting room. Try their wines, chat to anyone there, and we fully expect you’ll have a great time.