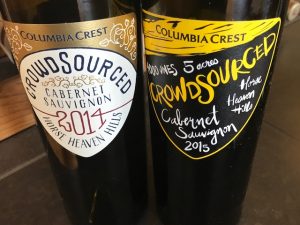 Three years ago Columbia Crest became the first winery in the world to crowdsource a wine through an interactive experience with wine enthusiasts.

Led by Juan Muñoz-Oca, Columbia Crest’s head winemaker, voters made decisions on every step of creating the wine — bud break, harvest, fermentation, the blend and the label.

While the two vintages have similarities, there are also some distinct differences, as we noticed when we recently held a side-by-side tasting. You can do the same by buying both vintages on their website. And you’ll also receive a discount.

Columbia Crest 2015 Crowdsourced™ Cabernet Sauvignon
Sourced from Horse Heaven Hills, the 2015 vintage blends Cabernet Sauvignon (80%) with 10% each of Merlot and Cabernet Franc. The wine was aged 12 months in 60% new oak barrels, which differs from the crowdsourced decision for the 2014 vintage. (See below.)

Another difference resulted from 2015 being one of the warmest growing seasons on record in Washington state.

The wine has a bouquet of red berries, herbs (from the Cab Franc) and barrel spice, followed by flavors of dark chocolate and dark berries. This is a bright Cabernet Sauvignon, which was a bit tight when we opened the bottle. But after some decanting, the flavors and texture developed into one tasty sip after another.

Columbia Crest 2014 Crowdsourced™ Cabernet Sauvignon
This inaugural vintage was also sourced from Horse Heaven Hills, but sat 16 months in 30% new oak barrels prior to bottling — compared to 12 months in 60% new oak barrels for the 2015 release, as mentioned.

This wine opens up with aromas of black tea, blackberry and dark cherry, followed by flavors of dark fruit, toffee, coffee and anise. We first tasted this wine soon after its release, and were delighted to see how much the flavors developed over one year.

Thanks to Columbia Crest for sending us samples, which we thoroughly enjoyed.