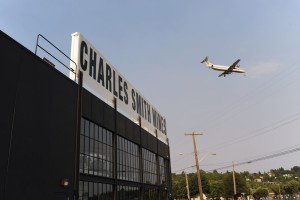 Now that we don’t live in Seattle anymore, we couldn’t visit Charles Smith Wines Jet City when it opened on July 25. So we decided to go on a road trip with our friends Jenise and Bob Stone (both have excellent palates), to see the new 32,000-square-foot winery in the Georgetown neighborhood, across from Boeing Field.

Jet City is located in a former Dr. Pepper bottling plant, which received a massive makeover by architect Tom Kundig. What a fantastic combination of steel, glass, concrete, barrels and big tanks, with 21-foot-tall windows looking out on the magnificent Mt. Rainier and the Boeing Field runways.

The downstairs tasting room also looks onto the first-floor production area. Unfortunately, the second floor, with its commercial kitchen, isn’t open yet, so we didn’t get a chance to check it out too. But according to reports from the grand opening, the area has an aviation theme, and the kitchen will be used to host harvest lunches and catered events.

Jet City is billed as the largest urban winery on the west coast. What a giant place for such a giant personality with giant hair, giant billboards and a giant production of wines — 750,000 cases a year.

Charles has said he wants Jet City to be “big and loud and rock n’ roll.” 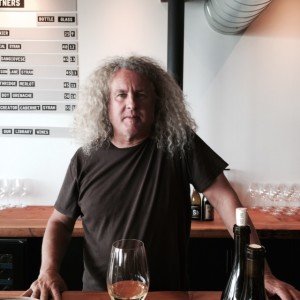 Fitting since Charles is one of Washington state’s rock-and-roll winemakers, along with our friend Brennon Leighton, former winemaker at Efeste who now leads the Jet City team. We were delighted see Brennon again yesterday and to discover that his new B. Leighton label is also available at Jet City.

We first met Charles at the 2010 Wine Bloggers Conference in Walla Walla. At midnight, he took some wine bloggers to his winery, where his rock and burlesque shows are legendary.

Charles has a commanding presence that is unique in the local wine industry. His showmanship could, but does not, overtake the impact of the wines he makes.

His first release,1999 K Syrah from Walla Walla Valley, initiated his wine-making style that continues today: “Small lots of single vineyard Syrahs and blends of Syrah, Cabernet Sauvignon, Grenache, Tempranillo and Viognier, all of which are hand-picked, foot-stomped, fermented with naturally occurring yeasts and basket pressed.”

In 2006, he created Charles Smith Wines, which are ready to be consumed immediately. These casual wines include Boom Boom Syrah! and The Velvet Devil Merlot, with funky black and white images on the labels.

Most recently, he created his sixth label, appropriately named Sixto, which features only Chardonnay, and is made in partnership with Brennon and Andrew Latta.

We wonder if there will soon be a new label, Charles Smith Wines Jet City. Until then, if the crowd there yesterday afternoon is any indication, Jet City looks like a success.