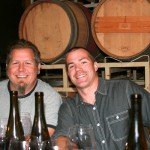 Winemaker extraordinaire Brennon Leighton is becoming a consulting winemaker at EFESTE in Woodinville and after Crush 2012, he will be relocating to eastern Washington near EFESTE’s vineyards and taking on additional projects with other wineries.

He personally selected winemaker Peter Devison, formerly from Apex, Alder Ridge and Willow Creek, to join him on an expanded EFESTE winemaking team “because of his experience in reductive winemaking — a distinctive old-world style seldom seen in Washington.”

“Peter’s knowledge of our winemaking style is incredible,” Brennon explained. “We have similar philosophies and perspectives that will make for a great progression. It’s like being in a foreign country and finding someone who can speak your language.”

Regular readers of this blog know we’ve been fans of Brennon and EFESTE for years. My article about Brennon in Seattleite Magazine landed him in third spot in the magazine’s Top Ten newsmakers of the year (2011). 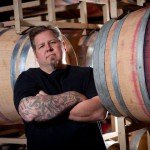 We first met him in 2008, when we barrel-tasted Jolie Bouche during a St. Nick’s event in Woodinville. We instantly became members of EFESTE’s Inner Circle wine club, and applauded when the next year, 2009, Seattle Magazine hailed Brennon as Winemaker to Watch and EFESTE as the Best New Winery.

As his star rose, Brennon remained constant – open, blunt, funny, sharp and passionate, a talented man whom my mother would have said “pulls no punches,” an artist who also likes to experiment and a thinker who reads several books a week.

EFESTE’s new winemaker, Peter Devision, is fortunate to join Brennon and the owners whose last names make up the letters that spell EFESTE: Daniel and Helen Ferrelli, Patrick Smith, and Kevin and Angie Taylor are also passionate about wine, dedicated to several worthy causes, and fun to hang out with in the tasting room.

We look forward to meeting him. In addition to talking wine, we have Canada in common – he’s from Nova Scotia and worked in my hometown, Vancouver before moving to Washington state.