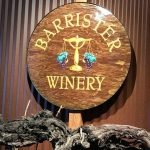 Barrister Winery has a large portfolio of beautiful wines, all of which have the signature style of a soft mouthfeel and gentle tannins. Contributing to this style is one of the most fascinating wine stories we have heard this year – the wines are “train settled.”

What does that mean? Barrister winemaker and owner Greg Lipsker explains: “Barrister’s barrel room, where the wines age anywhere from 1.5 to four years, is located under the train trestle for the BNSF Railroad. Every time a train passes overhead, the barrels are gently vibrated, helping the solids settle out very efficiently. 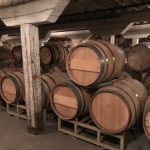 “Most wineries rack their wines three times while aging in the barrel. Because of this gentle train vibration, Barrister wines are only racked once. More than 25,000 trains a year pass overhead. By the time a Barrister Cabernet Sauvignon is ready to be bottled, the wine has been ‘gently shaken, not stirred’ more than 70,000 times. We are the only winery in Washington state to have train-settled wine.”

In other words, Barrister wines rock! We could tell the difference as we tasted through 10 Barrister wines when we were in Spokane in May. We spent a couple of captivating hours with Greg at the winery, and discovered that he is as engaging as his wines — a true storyteller. 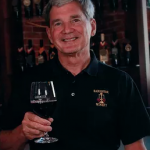 Barrister has its roots in home winemaking. Greg and Michael White, both lawyers, were vacationing with their families in British Columbia in 1997. En route, they stopped to buy wine and walked out of the store with a five-gallon wine-making kit. What began as a hobby for two lawyers turned into an urban winery that has earned remarkable acclaim since opening in 2001 in downtown Spokane. The winery’s name is fitting, since barrister is the British word for lawyer. 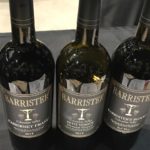 The popularity of Barrister’s Cabernet Franc put the winery on the map — not just regionally, but in national and international competitions as well. The winery also helped elevate the status of Cabernet Franc as a single variety in Washington state. Barrister Cab Franc is definitely what drew us to the winery around 2005, and kept us coming back. But we have since discovered that Greg and Michael also make many more fine wines.

You can read about the 10 wines that we tasted in Part 2 of our two-part series. We enjoyed Barrister wines so much that we purchased several bottles to take home.