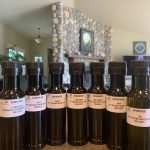 Avignonesi is the largest vineyard in Italy that produces vegan, organic, and certified-biodynamic wines. Located in Montepulciano, Avignonesi’s portfolio features almost two dozen wines, in addition to Grappa, olive oil and honey. We recently tasted seven mini-samples including Chardonnay, Rosato, Sangiovese, Merlot and two excellent red blends. Our favorite? Avignonesi Grifi 2017. All but one of these wines are distributed in 37 states in the U.S. Read on for more details.

According to the winery’s website, “In 2009 she bought the whole of Avignonesi with the intention of taking on an established winery recognized for its quality, innovative research and experimentation and take it to a new level of excellence.”

Moreover, the estate grew to 444 acres of vineyards and a state-of-the-art winemaking facility. “At Avignonesi, striving for excellence goes hand in hand with experimenting with 100% Tuscan wine-making processes.” This includes aging in terracotta jars and concrete eggs. 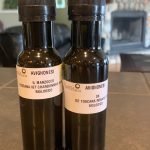 Il Marzocco Toscana Chardonnay aged in a concrete egg, a terracotta jar and oak barrels. So it does not taste like your typical 100% Chardonnay made in the U.S. It opens with aromas of flowers, apples and vanilla, and leads into flavors of oranges, honey and apricots. The winery named Il Marzocco after a stone lion located in front of Palazzo Avignonesi in Montepulciano. MRP: $45

Meanwhile, Avignonesi named QX Toscana Rosato after Quercus ilex, the Latin name of the holm oak that grows at the Capezzine Farm on the estate. The Rosato is made from 100% Sangiovese. Aromas of pears and grapefruit mirror on the palate. This is the only wine of the seven we tasted that is not available in the U.S. 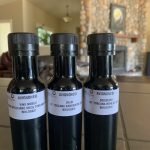 Vino Nobile Di Montepulciano DOCG 2016 is the estate’s flagship wine. It is 100% Sangiovese with a potential for aging up to 15 years. Aromas of cherries, plum, spices and herbs lead into flavors of more cherries, mint, and orange zest with a hint of licorice and wood notes. MRP: $24

Da-Di is Chinese for “earth, soil” which shines a light on how this bright wine is aged in Tuscan clay. The winery stores the Sangiovese in 11 different terracotta amphoras. After three months, it blends together, and then ages for two more months before bottling. As a result, Da-Di Toscana IGT Sangiovese 2019 is medium-bodied and delicate. On the nose, it opens with aromas of cherries, raspberries and strawberries. Next, the clay gives this 100% Sangiovese a vibrant and fresh taste of red fruit. MRP: $20

The winery named Desiderio Merlot Toscana IGT 2017 after a bull that lived on the Avignonesi family farm more than 100 years ago. During that time, Desiderio was the largest bull in Tuscany. And this is a big, 100% Merlot, which offers beautiful aromatics of cherries, plums, coffee and flint. On the palate, we found rich, velvety flavors of dark berries with hints of dark chocolate. MRP: $65 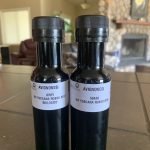 We adored both these red blends but Grifi 2017 won the side-by-side taste test. In addition, its $40 price is more palatable than the $99 cost of Avignonesi 50&50. Grifi blends 50% each of Sangiovese and Cabernet Sauvignon. This means the Sangiovese’s freshness perfectly aligns with the Cabernet Sauvignon’s backbone. Avignonesi calls this a “risk-rewarding wine for bullish producers only.” In 2014, Grifi was not produced due to adverse climate conditions. On the nose, the wine reveals black fruits and herbs. Further, the palate shows more black fruit, with a savory and smoky finish. MRP: $40

50&50 2015 is a pretty blend of Merlot and Sangiovese. And as you might have guessed by the name, it similarly balances 50% of each variety. In addition, 50&50 represents the friendship of the owners of Avignonesi in Montepulciano and Capannelle in Chianti Classico. Aromas of black cherries, blackberries and blueberries lead into flavors of red and black fruit, pomegranate and hints of anise and vanilla. MRP: $99

In conclusion, we enjoyed our introduction to these well-made wines from Avignonesi, the largest vineyard in Italy that produces vegan, organic, and certified-biodynamic wines. Above all, thank you, Avignonesi, for the samples. We look forward to finding these wines here in the U.S. and continuing our discovery.