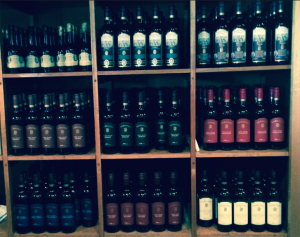 When we were in Australia in May, we received many recommendations to stop by Kay Brothers Amery Vineyards, the oldest McLaren Vale winery still in founding family hands.

We are so glad we followed that advice.

The Shiraz is spectacular, and the vineyards are steeped in history. Kay Brothers was established on February 2, 1891, and a diary has been kept every day since. This gives new meaning to the word “awesome.”

The diary pages meticulously describe the weather, the vintages and insights into the people, their lives and their hard work.

Equally as amazing were the wonderful people we met at Kay Brothers Cellar Door (the Australian term for “tasting room”). In particular, Michelle Taylor entertained us for an hour or more with stories and enthusiasm about the winery’s history and the wine region, as we savored some pretty magnificent pours of Kay Brothers wine. Wow.

We became fans of each wine we tasted at Kay Brothers Cellar Door. But our favorite, and the wine we brought home to Seattle, was the spectacular Kay Brothers 2011 Block 6 Shiraz, handpicked from 119-year-old vines.

Did we say wow?

Specifically, this stellar wine was sourced from vines that were planted on July 18, 1892. Known as one of the best Shiraz produced in McLaren Vale, Block 6 Shiraz is robust, rich, complex, structured, smooth and simply beautiful.

The outstanding 2011 vintage is the 27th release of this single vineyard wine, produced in the  tradition of open-top fermentation and basket-pressing used for more than a century.

We also were impressed with Kay Brothers 2011 Cuthbert Cabernet. In wine country known worldwide for Shiraz, it was a breath of fresh air to experience a Cabernet Sauvignon of this quality. The Cabernet vines also go back more than a century but over the years, the grapes were mainly blended with Shiraz for full-bodied Australian Claret.

The 2011 is the fourth release of this commemorative wine honoring Cuthbert “Cud” Kay, who was responsible for the development of Cabs at Kay Brothers. (Only made in years when the grapes are deemed worthy, just four vintages have been made so far.) In the family tradition, this Cabernet is rich, vibrant and structured.

As you can see from the photo at the beginning of this post, Kay Brothers produces numerous other wines too, including Cabernet Merlot, the award-winning Mataro (Mouvedre) and Grenache.

If you travel to Australia, we highly recommend that you make a point of stopping by this outstanding cellar door. You can also buy Kay Brothers wines in the U.S. from distributor Quintessential Wines, and in Canada from Inland Trading.