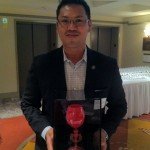 It’s not often that I dedicate an entire blog post to a press release that I received in email. (I get hit with at least 100 emails every day!) But today’s press release from the Washington Wine Commission seems worthy of a placement. So let’s hear the applause for the recipients of the 2011 Washington Wine Restaurant Awards, sponsored by Seattle Business magazine.

“Canlis Restaurant has been an incredible supporter of Washington State wines since our industry’s inception,” said Robin Pollard, executive director of the Washington State Wine Commission.  “We are proud to honor such an iconic establishment for their dedication and commitment to providing truly unforgettable experiences for their guests.”

Over the past 60 years, the Canlis family has defined and redefined fine dining in Seattle.  With more than 300 Washington State wines on their list of 2,000 world-class bottlings, 25% of their wine sales coming from Washington State, a custom wine produced from harvest to bottling between their wine team and Buty Winery, amazing wine dinners featuring the best the state has to offer and their unerring dedication to helping the Washington State wine industry continue to grow, Canlis Restaurant was chosen as the Restaurant of the Year.

Congratulations to all! Additional details are availalbe on the Washington Wine Restaurant Awards website.