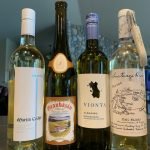 Crisp, light and refreshing, Rías Baixas Albariño derives natural elegance from its misty, coastal Spanish terroir. Home to the native grape variety, Albariño, the area produces some of the world’s most beautiful white wines. Albarinô showcases amazing aromas and crisp flavors of zesty citrus, stone fruit, mineral notes and acidity that are the signature of Rías Baixas. There is lots of variety, style, texture and diversity in the “wine of the sea.” And they are very affordable. We recently tasted four mouthwatering Rías Baixas Albariños, which are all available in the U.S. at a price point of $17-$24. Read on for details. 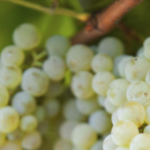 Winemaking in Rías Baixas dates back thousands of years. However, the region didn’t establish a global reputation until the past few decades. Subsequently, the area is now well-known as a producer of top quality wines from its signature grape, Albariño. This grape represents 96% of all plantings there.

D.O. Rías Balxas has a rainy maritime climate in Spain’s northwest region of Galicia. Galicia more closely resembles the green fields and rocky coasts of coastal Ireland than other parts of Spain. Consequently, people often refer to the region as “Green Spain,” with moderate year-round temperatures, ocean mists and an average annual rainfall that in some spots is nearly three times the national average, balanced by more than 2,200 hours of sunshine. This ensures Albariño ripens fully and produces wines with good natural acidity and an aromatic profile.

The Albariño grape Is the prize of the region, producing a fragrant, full-bodied wine. While some Albariño wines express subtle differences, they are all crisp, elegant and fresh. In addition, these wines are bone-dry and aromatic, packed with flavors of white peach, apricot, melon, pineapple, mango and honeysuckle. They also share natural acidity, with mineral notes, and moderate alcohol (12%). They pair with seafood and shellfish, two staples of Galician cuisine, and also stand up well to spicy and smoked dishes. Or pour them as an apéritif, by the fireplace in the winter or on the patio in the warmer weather. 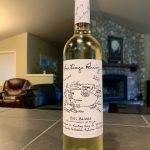 Santiago Ruiz 2021 Albariño is refreshing, bursting with lemon and grapefruit aromas and flavors, and notes of pears and apples. Albariño (82%) is blended with a Loureiro (9%), Caiño Blanco (4%), Treixadura (3%) and Godello (2%) and fermented in small stainless-steel tanks. As a result, this combination of five native grape varieties to Rías Baixas is full-bodied and complex with minerality and bright acidity, distinct to the region. We loved it. We sipped on it with a cheese plate before dinner. However, we also suggest pairing it with seafood, Asian dishes or white meats.

And a fun story about the label: More than 50 years ago, Isabel Ruiz, Santiago’s eldest daughter, celebrated her wedding on the family estate. To help the guests find their way to the winery in San Miguel de Tabagón, she decided to draw them a map. Her father was delighted with this little detail, which, as you can see, is on the label. The family’s maternal grandfather was one of the first people to produce and label wines in Galacia, resulting in the name “Father of Albariño.” His flair as a pioneer led him to bring the first stainless steel tanks to the region, placing him firmly at the cutting edge of winemaking. 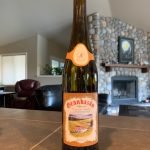 This is classic 100% estate-grown Albariño, from vineyards more than 35 years old. It showcases the grape’s typical salinity and acidity with ripe tropical fruits, creamy texture and threaded with minerality. Aromas of green apple, passion fruit and green melons lead into flavors of more melons and apples, citrus and hints of white pepper and balsamic notes. In the 1960s, Manuel Otero y Otero bought a land parcel planted with feed for cattle and decided to plant 14 hectares of vineyards. Subsequently, 20 years later, his son, Manuel Otero Candeira constructed Granbazán, a chateau. Further, Granbazán’s high-quality wine elevated the reputation of Galicia as well as Rías Baixas wines. 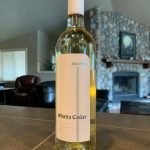 We took Bodegas Martin Códax Albariño 2021 to a Thanksgiving feast with friends, who quickly polished it off. We weren’t the only ones who loved it! Martín Códax is an innovative winery in the heart of Rías Baixas, founded more than 25 years ago by 50 local farmers. This Albariño bears the name of 13th-century poet and performer, Martín Códax, whose songs are still celebrated in the coastal villages of Galicia. This bright wine opens with aromas of apples, lemons and mandarin oranges. On the palate, flavors of pears and apricots mingle with herbaceous and balsamic notes, threaded with minerality. Some critics labelled it “an Albariño with the soul of the sea.” The winery is one of the only producers in the region to harvest 100% of their grapes by hand. Today, Martín Códax oversees more than 1,400 small vineyard parcels farmed by 550 families. 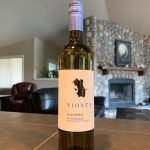 Vionta Is named after Isla Vionta, an Island on the Atlantic coast that Is part of a national park created to protect seabirds. This Albariño features aromas of mango, kiwi, peach, lemon, melon, apples and apricot, many of which mirror the palate. In 1995, the winery launched on this small sandy island at the mouth of the Ría Arousa. Vionta comes from 15-year-old trellised vines. Planted on granitic soil, the vineyard enjoys an Atlantic climate with mild temperatures and abundant rains.

In conclusion, Albariño offers variety, style and texture, with minerality and zesty citrus and stone fruit. These four are delicious, perfect for holiday feasts and affordable enough to take to parties or give as gifts to friends. We really enjoyed these four “wines of the sea,” which are available in the U.S.

Thank you Gregory + Vine for the samples.