After the Wine Blogger Conference (WBC10) in Walla Walla, Dave and I took Melanie (Dallas Wine Chick) and her husband, John on an adventure through Central Washington wine country –  Prosser, Red Mountain and Yakima.

First, we said farewell to our new friends, Amber and Greg, at Desert Wind Winery in Prosser, and then headed down the road to see our dear friend Ali at Alexandria Nicole Cellars. (Unfortunately winemaker extraordinaire, Jarrod Boyle, was out of town, so we didn’t get to see our pal “Mr. Big” too.) 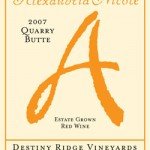 As ANC wine club members, we were ushered to the special secret room in the back, where we sampled their current excellent tasting list and found some new favorites including 2007 Jet Black Syrah, 2009 Rousanne and A2 Pinot Gris. We also had so much fun introducing Mel and John to our long-time faves, Quarry Butte, Cabernet and Viognier, and then enjoying some awesome library wines from ANC’s state-of-the-art enomatics system.

Alexandria Nicole Cellars produces 21 varietals, and we could have stayed there all day! But we had a lunch date at Tuscany with some new Twitter friends, Coop (Cooper Wine Company), Scott (Wino4Ever), Sara (Sara Nelson Design) and Kevin (KevinCole 509). We first met Coop and Scott a few days earlier at the Wine Blogger Conference, but we had never met Kevin and Sara. Suffice it to say that these friendships have been cemented and the food at Tuscany was absolutely delicious. We will be back. In addition, we were fortunate to taste Coop’s 2008 Pinot Gris, which was perfect for a hot, sunny day. Cooper Wine Company will host its Red Mountain Grand Opening on Sept. 11, and believe me, it will be well worth the trip. Cooper Wine Company is a small, family-run operation that is all about Bordeaux-style reds. And regular readers of this blog know that Bordeaux reds are my #1 choice of wines to drink. So you won’t be surprised that I’m already a fan of Cooper Wine.

Not only does Coop make great wines but also, he is a kindred soul. We talked throughout the day about a number of things, and discovered that we have similar attitudes about many wine-related topics. Hopefully we’ll remain friends even if Dave decides to borrow Coop’s wonderful dog, D.B., for an extended period of time!

Meanwhile, back to our day: From lunch at Tuscany in Prosser, Coop took us down the road to Red Mountain, where we spent a couple of fun-filled hours with Marilyn and Cindy at Fidelitas Wines. Dave and I first visited the tasting room in Oct. 2009,  but we’ve been fans of wines crafted by respected winemaker Charlie Hoppes for much longer. (Charlie was in France when we visited; I can’t wait to talk to him about Chateau Margaux, my favorite Bordeaux winery that we visited in 2005.) 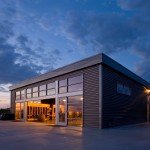 But Charlie’s absence didn’t stop us from rockin’ the wines with Cindy and Marilyn, who also entertained us with some musical vibes and great conversation. We brought home Fidelitas 2007 Red Mountain Cabernet Franc – I’ve since heard that it’s sold out and wish we had purchased more. The Cab Franc was our favorite, but seriously, there wasn’t a Fidelitas wine we tasted that was anything less than excellent.

We could have stayed there even longer, but they had work to do and we had one more stop on the day’s wine trail: Gilbert Cellars in Yakima. We’ve been fans of Gilbert Cellars and friends with Sean Gilbert since we were introduced to his 2005 Estate Syrah at Sexy Syrah at Salty’s back in 2008.

Sean’s winery – and his wines – have exploded since then. Gilbert Cellars tasting room is also a wine bar with scrumptious appetizers; it’s a must-stop for us in Yakima and/or on the way to Prosser and Walla Walla. So once again, we were delighted to introduce Melanie and John to Sean, and to Gilbert Cellars wines, before we wrapped up this incredible day of wine tasting. 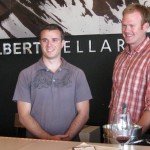 Indeed, we tasted through much of Gilbert’s line-up, accompanied by cheeses, olives and almonds: a dry but creamy Rose’ of Mourvedre; both unoaked and oaked Chardonnay; two very different Syrahs to appeal to different palates; a chewy, big Malbec; and our favorite Cab Franc and Cab Sauv, which are definite must-haves for our special dinners. Thankfully our hotel was within walking distance!

What a day! Our special thanks go to Ali, Coop, Marilyn, Cindy and Sean for making it so memorable.