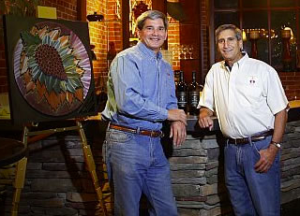 Congratulations to Greg Lipsker, co-owner of Barrister Winery in Spokane, who was chosen as the winemaker to create the blend for 2013 Legends of Washington Wine Gala, an annual fundraising program in support of the Walter Clore Wine & Culinary Center in Prosser.

Legends honors those whose contributions to the community and the wine industry are of historical and lasting significance.

The news was announced on May 30, but I was traveling and unable to congratulate Greg and Barrister’s Winery until now.

Barrister is known for limited production red wines. Our favorite, consistent over the years, has been the stellar Barrister Cabernet Franc. As we noted at Taste Washington last year, the 09 Barrister Cab Franc was a standout.

Don’t just take our word for it! Barrister’s Cab Franc has won awards at the L.A. World of Wines Competition, the Northwest Wine Summit, and the Tri-Cities Wine Festival.

Although we don’t get to Spokane often, we make a point to stop by Barrister’s table at numerous Washington wine events throughout the year. If we’re lucky, Greg and Barrister Winery co-owner Michael White will be pouring and have time for a chat.

The fruit for the multi-vintage 2013 Legends blend was sourced by Greg from seven different vineyards:

The Legends 2013 blend will be released on August 9 at the 2013 Legends of Washington Wine Gala.

Greg is the seventh winemaker to make an exclusive blend to commemorate an annual inductee into the Washington Wine Hall of Fame.