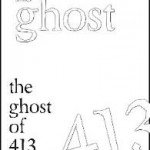 This is one of the best value wines we have had in a long time: 2009 Ghost of 413 Red. And we put our money where our mouths are – after buying two bottles from our friends at Full Pull Wine, we put in an order for a case.

Ghost of 413 is released by Giant Wine Co., a collaboration between Chris Gorman of Gorman Winery and Mark McNeilly from Mark Ryan Winery.

The first vintage came in 2005 when, the story goes, Mark and Chris weren’t sure how the wine would taste, so they decided to keep their names invisible and the “ghost” was born.

No need to hide behind Casper this vintage — 2009 Ghost of 413 Red  is not a phantom wine! You’ll discover a ripe rich wine that blends 90% Cabernet Sauvingnon with a 10% pinch of Syrah and Merlot. Or as it’s described on the Giant Wine website, “Dark and velvety rich with plenty of stuffing to scare wines at twice the price.”

Five thousand cases were produced, and according to Paul Zitarelli at Full Pull, he expects the wine to be sold out by late February or early March. So what are you waiting for?