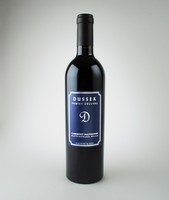 Regular readers of this blog know that we have long been fans of Dussek Cabernet Sauvignon from The Woodhouse Wine Estates. The 2004 vintage was spectacular, and a favorite of ours. My sister-with-the-incredible-palate in Vancouver also gave it a thumbs up.

We were delighted to discover that the 2006 vintage is even better! 2006 Dussek Cabernet Sauvignon is elegant, big and bold. Frankly, I don’t know why more isn’t written about this gem, priced at $36.

The Woodhouse Wine Estates has a robust wine club with passionate members, but its wines have been under the radar for too long.  Just sayin’.

The Woodhouse signature is to release its wine later than many others, giving the wines more time to express their fullest flavor complexities. The 2006 Dussek Cab was released in May 2011, drinks extremely well now, and could be kept in the cellar for a few years.

The 2004 Dussek sold out quickly, and the 2005 vintage (decent, but not as incredible as its predecessor or the current release) sold out too. There are limited quantities left of the 2006 Dussek – you can only order a maximum of six bottles.

Yes, we just ordered six, even though we already have a case stocked in our cellar. So did my sister!